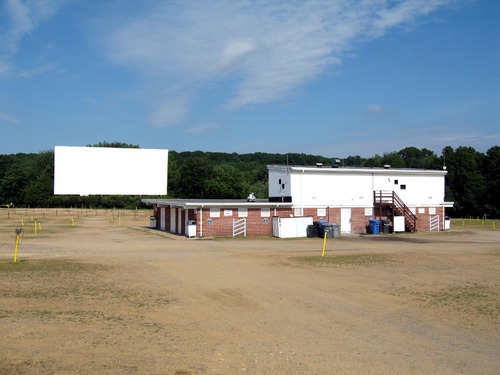 This is the largest of the remaining operating drive-ins in Connecticut. It opened April 16, 1954 with “Ma & Pa Kettle at Home” and Audie Murphy in “ Ride Clear of Diablo”. It has a capacity of 950 cars. The original screen is 110' wide. The drive-in plays double bills on each screen with at least one screen devoted to family entertainment. It is open seasonally from April through October, on weekends only during spring and fall and daily during the summer months.

Admission is $6.50 for adults and $3.00 for children 3-12. Wednesdays is bargain night during the summer months with a carload for $12.00. The sound is provided by both FM and conventional speakers.

The drive-in also features one of the largest flea markets in Connecticut during operational months from 8AM until 3PM.

I went to Mansfield Drive-In this past summer. Being a virgin to theatre drive-ins it was an interesting experience. I love the fact that they have double features. One tip is to get there early to get a good front row spot. The concession stand offers hamburgers, hot dogs, fries, ice cream, popcorn, soda, headache pills, and mosquito spray. The restrooms though clean look like they came out of the 1960’s. They have a playground for the kids open until dark and the FM reception is really good. Bring a blanket because even in the summer at night it gets cool outside. Intermission time is a good time to get refreshments between the movies and watch the dancing popcorn. I look forward to going back in the summer.

There was a great piece on this theatre as well as Pleasant Valley Drive-in in last week’s Play magazine (weekly) in the New Haven, CT area. View link

Excellent piece in the NYTimes CT Section on this and the other drive-in.

One of the darker features to the Mansfield Drive-In was in the early ‘80’s. They did show X-Rated fare. This was in the late fall and early winter months. There were several wrecks on Rt. 32 caused by people seeing the screen from the road. At that time there was only one screen and was clearly (yet dimly) seen at all times of the year! I left Willimantic in 1983 for Florida, but remember seeing dozens of great movies in the 70’s and early 80’s. The playground was always nicely maintained. The only gripe I had was that back then, the speakers were frequently non-operational. Cars were always jockeying for a speaker that worked!

Good story in the Courant about “go digital or go dark” in relation to the Pleasant Valley Drive-In. This theater among others in the state are mentioned.

This opened on April 16th, 1954. Grand opening ad in the photo section.

According to a 2016 interview on YouTube, owner Michael Jungden started managing the Mansfield in 1974. He leased the drive-in “a few years” after that, added two screens in 1985, and bought it in 1991.

Thanks to Google Books, here are some Billboard magazine excerpts. Personally, I love seeing how the story slowly evolves.

Nov. 21, 1953: A March, 1954, opening is planned for the $150,000, 750-car capacity drive-in being built at Mansfield, Conn., by General Theaters, Inc., of which Morris Keppner and Lou Lipman are principal officers. The project is the first of several planned theater units for the West Hartford, Conn., corporation. Keppner is partner in the Burnside Theater, East Hartford, Conn., while Lipman is a real estate developer.

Oct. 30, 1954: The largest screen in eastern Connecticut, 116 feet wide and 62 feet high, has been installed at Mansfield Drive-In, Willimantic. The theater is owned and operated by General Theaters, Inc., West Hartford, principals in which are Morris Keppner and Lou Lipman.

Nov. 20, 1954: The 750-car capacity Mansfield (Conn.) Drive-In, operated by General Theaters, Inc., West Hartford, Conn., will be increased to 850 by spring, according to partners Morris Keppner and Lou Lipman.

Here’s the first time I’ve ever noticed a drive-in expanding just for a playground. From Billboard, Sept. 4, 1954: “Lou Lipman and Morris Keppner, of the Mansfield (Conn.) Drive-In, have completed a children’s playground on newly acquired acreage adjoining the theater.”