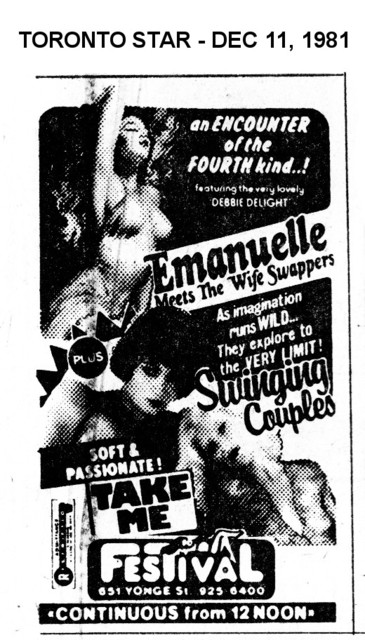 Opened as the Victoria Theatre in 1919. Over the years it had several name changes, becoming the Astor Theatre on November 10, 1949. The New Yorker Theatre was remodeled in the 1960’s, but most of its interior was lost over time. The theatre has since been closed and all but a portion of its façade demolished. The façade was incorporated into the new Panasonic Theatre which was built on the site of the New Yorker.

The New Yorker was definitely known as as the Victoria – (there’s a picture of it here; you may have to scroll up or down to see the building as it was and later in 1994): View link

The confusion is due to the fact that there was another Victoria Theatre – specifically Shea’s Victoria – which opened in 1910 and was a very large vaudeville house at 83 Victoria Street, near Richmond, so apparently, at least for awhile, Toronto may have had two Victoria theatres. Shea’s Victoria closed for some years as a theater (possibly made redundant after Shea’s opened the even larger Shea’s Hippodrome in 1914, and vaudeville was fading). It was then re-opened by Famous Players as the Victoria. This indeed was the Victoria that showed “Samson and Delilah”. In the meantime, the Victoria on Yonge changed names at least twice.

I am doubtful, though that the New Yorker was ever known as the Victory; the only Victory Theatre I can find was on Spadina.

Thanks for clearing up the confusion.

I figure it looks better in the dark when it is all lit up.

If you want to check performance times telephone ( WAverley 5006 )

The Victory theatre on Spadina already HAS a page here on Cinema Treasures.

Yes I posted that in response to the post five above this one.

I am sorry if I inadvertently triggered an off-topic discussion; At the time I posted the comment about the Victory above, I was primarily interested in the issue raised by Joe Vogel about the whether the New Yorker was or was not at one time the Victoria.

However, at the time of the posting, “Victory” was listed in the aka list for the New Yorker, and I could not find any support for that name. Quite possibly, Victory was confused with Victoria by someone in the past. It has since been deleted from the aka list above the headnote, but now my remark seems out of place. My attempt at killing two birds with one stone had an unintended result.

Actualy I apologize for posting on the wrong thread.
I was just quoting a source of reference to confirm the address of the “Victory Theatre”

With this I bid you farewell I have a plane to catch.

1935 photo as the Embassy via Toronto Public Library.