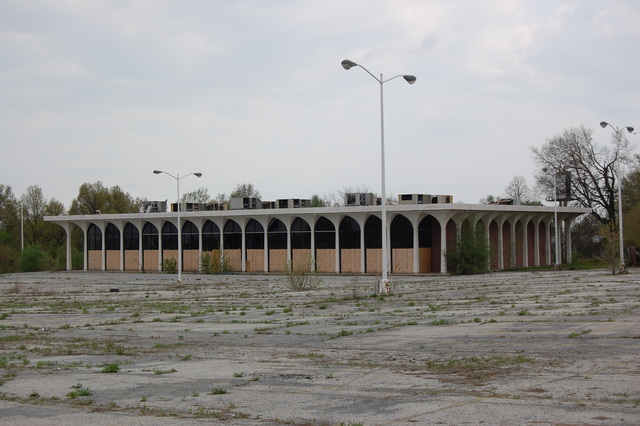 The Blue Ridge Cinema East was located across from the Blue Ridge Mall on Highway 40 just south of Interstate 70. It was a twin to its sister theatre Truman Corners. It had the white arches with the white pilasters all along the front of the glass front. It opened in the mid-1960’s and was closed by AMC Theatres in the late-1980’s. The lobby was large and spacious and the auditoriums were large and spacious.

The Blue Ridge Cinema East was demolished in August 2009.

I saw in the paper the theater is going to be demolished within the next 60 days. I was really hoping they would open up a dollar theater in there or atleast use that building for something. It was really a neat place. It’s a shame that it has just sat there and rotted the last 12 or so years. I’ll be sad to see it torn down.

Well, they started tearing her down Monday, August 3rd, 2009. Another old hangout gone. :(

The December 20, 1971, issue of Boxoffice gave the total seating capacity of the Blue Ridge Cinemas as 1,250. The house opened as a four-screener, and was owned by the Mid-America Cinema Corporation. An invitational premier was set for December 23, prior to the public opening.

A December 11, 1972, Boxoffice article about Mid-America Cinema said that the Blue Ridge quad had been the company’s first indoor theater. Mid-America had operated a number of drive-ins in the Kansas City area previously.

The 1971 Boxoffice item also names Fullerton, Carey, Kaster & Oman as the architects. Later the firm was just Fullerton, Carey & Oman, and also Fullerton, Carey, Oman & Alexander for a while. I’ve found a few references to this firm being one of two that designed a number of early AMC multiplexes.

I spent four years of my high school and college years (1978-1982) running the projectors for BRC-East. Wow what a blast and the memories! How about the one where the ushers all picked up a fellow usher’s MG car and placed it between two of the columns while the poor guy was on a date in the theatre… When he got out of the show he went as red as the blazers we all wore! He couldn’t go forward or backwards more than two inches – Man we all fell about the place!

I went into the old building in November of 2006 one rainy Saturday afternoon with my son in tow. The front door was unlocked and we walked right in. The copper thieves had already hit it HARD! – it was in sad shape. I showed my son where I used to sit while the machines were all running. He took a look around and exclaimed that “his” initials were carved in to that workbench leg… I HAD to laugh! Its a shame, my grade-school has been torn down – now this. Though, the memories will only leave when I do.

I cannot believe the old BRC is no more. I spent many years working there doing everything from popping popcorn, selling tickets, and so much more. Those of us who worked there were like a family. It didn’t matter if you went to Truman, Chrisman, or VanHorn. It was so much fun and I will never forget nor regret the experiences I had from 1976 to 1981!.

I used to work at Blue Ridge East from December ‘87 to July '89 and I loved that place. The crew got along great. We had the prettiest concession girls in town and the best nachos. I especially remember changing the marquee on Thursday nights. The back marquee was a good 30 feet in the air and always scared the crap out of me.

I’d say from 78-92 I probably saw more movies at this theater than any other in the KC area. This includes Independence Center 2, Midland, Independence Square, Brywood 6, Bannister Mall(both of them),Blue Ridge Cinema West, and 40 Hiway Drive In. Some of the movies I saw here were Tootsie, The Shining, Empire Strikes Back, Blade Runner(small theater as you entered on the left), The Thing(probably my greatest movie experience), Platoon, Richard Pryor on the Sunset Strip, Star Trek TMP, The Black Hole, The Electric Horseman, A Few Good Men, Return of the Jedi, High Anxiety, Indiana Jones, Superman II, The Right Stuff, 2010 Odyssey 2. So many good times RIP Blue Ridge Cinema East!