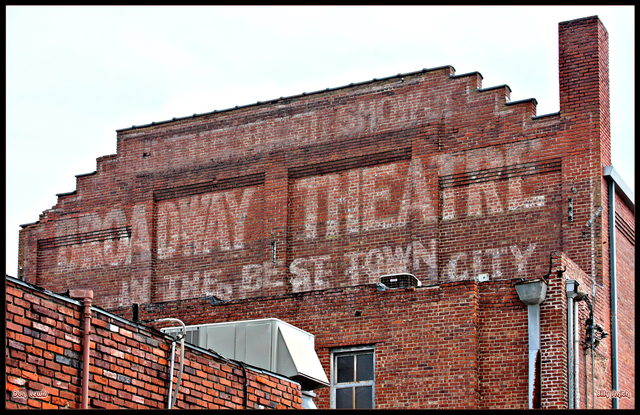 The Broadway Theatre was opened in 1913 and was operated and managed under Proctor Marsh Theatres. The theatre closed in the mid-1960’s and was later used by Hunts Department Store. The balcony level was the children’s department. The department store closed in the 1980’s.

Shown on this web page is a 1904 architectural drawing for Muskogee Opera House (AKA-Broadway Theatre). During the construction faze the hotel portion had been redesigned into Hunt’s Department Store,
View link

The school sketch opened as Washington Grammar School and burned to the ground in early 1950.

Here is a March 1921 ad from the Muskogee Times-Democrat:
http://tinyurl.com/yj2rwqg

Courtesy of ken mc, here is a 1921 newpaper ad for the Yale Theatre -
View link

Street View was updated too far east. The address 211 is displayed on the lower building that is just past the end of the building with the concrete canopy over the sidewalk.

An article on Muskogee’s theaters in the summer, 2000, edition of 3 Rivers Historian, published by the Three Rivers Museum, says that the Broadway Theatre was built in 1912 by Fred Turner, who hired George Procter to act as manager and Hugh Marsh to operate the projector. Procter and Marsh took a lease on the theater in 1923.

Google Documents Quick View of the issue with the article.

From 2013 a view of the Broadway Theatre on flickr.

The July 4, 1912 issue of The Tradesman had this item dateline Muskogee:

“In the very near future the new Broadway theater, being built by the Homestead Ammusement Company, will be thrown open to the public, and this building will give to the city, with our present equipment — the best play house facilities of any city of its size in the country.”