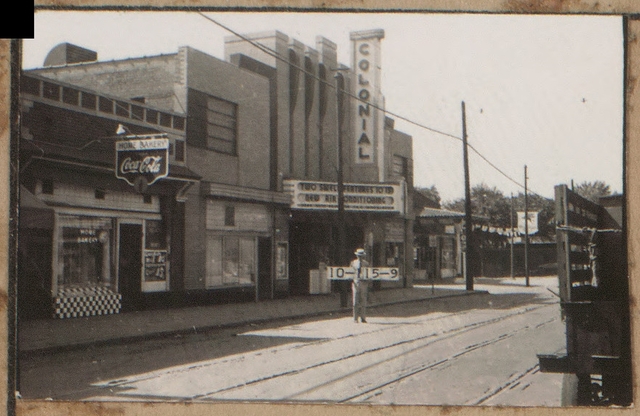 A single screen neighborhood theatre located on Woodland Avenue just north of E. 39th Street. It opened in 1909, and was badly damaged by a fire in 1938. It was rebuilt in Art Deco style to the plans of architect Clarence Kivett. Blonde brick exterior with a bright red trim. Red stipes of a tile run from the roof to the top of the small triangular-shaped marquee. Seating is given as 660. It was closed November 23, 1952.

This theatre still stands vacant just off 39th & The Paseo. A picture can be seen at:
http://www.cinematour.com/tour.php?db=us&id=19204

According to a December 5, 1926 article in the Kansas City Star, this was originally a 1909 “neighborhood amusement place” and “nickel show” theatre which was renovated into a motion picture theatre.

A February 21 1938 article says that the building was destroyed by a fire, witnessed by about 600 spectators.

I assume it was rebuilt not long after the fire.

The Colonial Theatre closed in the 1950’s and was sold to union for meetings. It was later given to the neighborhood as a community center and the box-office, upright sign and theatre doors were
removed. The auditorium floor was flattened for a basketball court and pool table area. It was sold to the Fine Arts theatre group who converted it to a sound stage and added a 100 seat theatre screening room. The film DETOUR ( 1990 ) was filmed on the stage. It was also used for post production and editing of the Paul Newman film MR. AND MRS BRIDGE. It currently is the warehouse for the Fine Arts Theatre Group.

According to the April 9, 1938, issue of The Film Daily, when the Colonial Theatre was rebuilt following the fire that year, the architect for the project was Clarence Kivett. This was seven years before Kivett formed a partnership with Ralph E. Myers. From 1945 to 1975, Kivett & Myers was the leading architectural design firm in Kansas City.

The Colonial Theatre that burned in 1938 was the second house on the site. The story of the unusual method of replacing the original 1909 theater is told in this brief article from Motion Picture News of October 14, 1927:

“A construction feat has just been accomplished at Thirty-ninth Street and Woodland Avenue, Kansas City; where a new and larger motion picture theatre has been erected over an old one without discontinuing operation of the theatre for a single night. The construction work was in progress more than twenty-two weeks. The new theatre structure of the new Colonial Theatre, of which H. H. Barrett is manager, is higher and occupies twelve additional feet of ground on either side of the old building, which had stood there since 1909 and was erected while the latter was still standing.

“When the new building was completed the old one was removed from within, bit by bit, up until the formal opening of the new theatre this week. The seating capacity of 660 persons has been doubled through the addition of a balcony and the additional width on each side.”

The rebuilt theater in 1938 did not have a balcony. It had the projection booth, managers office and two restrooms on each side upstairs. It had a small stage in front of the screen with footlights . I believe it closed before converting to Cinemascope. The projectors were Model |K Motiographs with cast iron bases and were removed in the 1950’s when it was sold to a Union Hall. The upright Marquee and original facade remained intact until it was gifted to the city. A sign company removed the old upright sign for scrap as they did many of the theater signs at the time. We use the building for storage and as of this date it is for sale. wade williams

Closed for good on Sunday, November 23, 1952, showing Gregory Peck in a year and half old movie, ONLY THE VALIANT, and a retitled film from 1947, Barbara Stanwyck in MAN KILLER aka THE OTHER LOVE. (Kansas City Star)