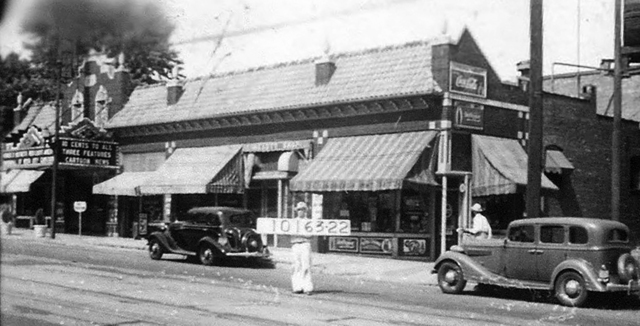 It was converted into the Town Ballroom which opened in August 1953 and closed in the mid to late-1970’s.

The correct address for the Lindbergh Theater was 4011 Troost Ave, not 3036 Prospect. That was the address of the Linwood Theater.

The 1950 edition of Film Daily Yearbook still lists it as the Fiesta Theatre with a seating capacity of 1,125.

The Autumn, 2009, issue of the Jackson County Historical Society’s quarterly journal had an article about Kansas City’s neighborhood theaters (PDF here.) It says that the Lindbergh Theatre opened on Christmas Day, 1928. The theater had a $25,000 Robert Morton organ, and was built for Abe Baier, who also operated the Bagdad Theatre. The house was named for aviator Charles Lindbergh. The auditorium had been built behind a row of existing stores which were remodeled in the Spanish style then popular.

In December, 1941, the house was renamed Fiesta Theatre. It operated until May, 1953. In August of that year Baier leased the building to the operator of a dance hall, and after remodeling and the leveling of the floor it was opened as the Town Hall ballroom. The ballroom was still operating in the early 1970s, but the building had been demolished by 1980.

An item in the August 6, 1928, issue of the perpetually frustrating trade journal The Film Daily gave the name of the architect of Baier’s new theater as C. F. Cons, but the Internet provides no other references to an architect of that name. I suspect that this was yet another of the magazine’s plethora of typos.