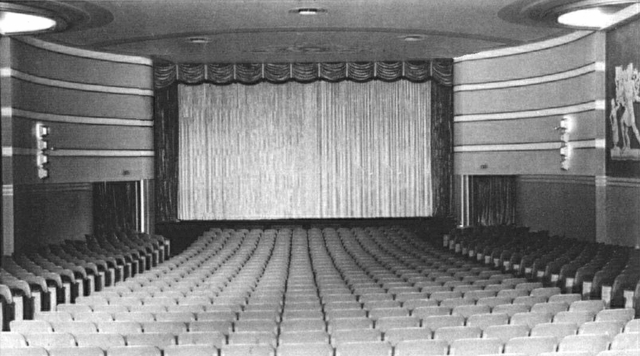 Unfortunatly it is too bad that the TOWER is gone. But in fact the building that houses the Barnes and Noble is the former Rosenbergs that was next to the theatre. Only the facade and the lobby were on 4th street the actual theatre was at the back of 3rd Street. This is the theatre were I had my very first job ever… I handed up letters to change the marquee and for this got free admission to the movies there.

www.geocities.com/jackg46/Ebay/TOWER-SR.jpg Here is a link to a picture of the Tower Theatre. I am not sure how long the link will be active but its a great picture. by the way… this is an S. Charles Lee theatre.

According to “The Show Starts on The Sidewalk”, S. Charles Lee designed this theatre in 1939 in an art-moderne style and it seated 900.

This photo was taken when the theater opened in 1939:
http://tinyurl.com/25hmaj

Does ANYONE in Santa Rosa remember the 20th Century West Theater at 1630 Range Avenue? The Kaiser Permanente Center is nearby today.
Was it torn down? I know it existed because I took pictures of it in 1966 and called the Sonoma Country Library today and got the address from a 1966 phone book? I hope someone replies.

I’ve never been to Santa Rosa, but the 20th Century West Theatre is mentioned in the April 26, 1965, issue of Boxoffice Magazine, which says that “The Greatest Story Ever Told” was the first movie shown at the recently opened house.

Originally built for independent operators Mr. and Mrs. William Blair, the theater was bought in 1968 by the Sonoma Theatre Corporation, headed by George Mann, Robert L. Lippert, and Charles J. Maestri. Sonoma Theatre Corp. also bought a twin-screen house elsewhere in Santa Rosa from the Blairs at the same time.

The July 22, 1974, issue of Boxoffice said that Sonoma Theatres would expand the 20th Century West by adding two 400-seat auditoriums adjacent to the original 800-seat house, with all three sharing a common entrance and lobby. The theater would be renamed the Coddingtown Cinemas.

Mike Rivest’s list of Sonoma County theaters (PDF file here) says that the house was expanded to four screens in the late 1980s, was last operated by the United Artists circuit, and was closed about 2000.

Try putting the address into Google Maps and looking at the current building in Street View. It looks about the right size to have held a triplex with 1600 seats, but it contains retail stores now.

imrobert: The 20th Century West Theatre has been listed at Cinema Treasures under its later name, Coddingtown Cinemas.

I believe that the rendering of a proposed Vogue Theatre at Santa Rosa appearing in the upper right corner of this page of Boxoffice for April 29, 1939, depicts an early version of the house that eventually opened as the Tower Theatre.

This opened on October 5th, 1939. Grand opening below: