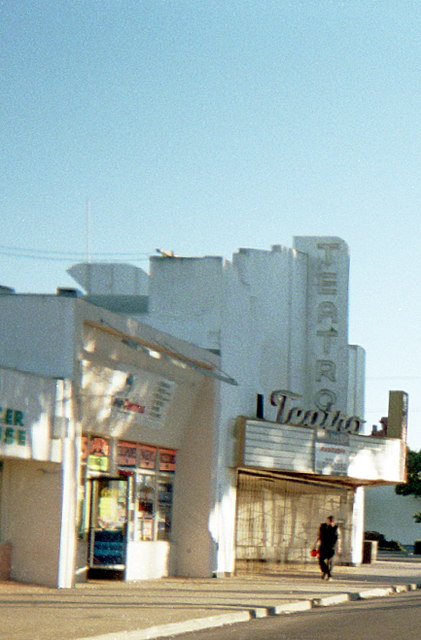 The Boulevard Theatre opened in 1929. Later known as Teatro, it was a popular downtown movie theater showing Spanish-language films for decades. After it finally closed in 1993, the Teatro became a popular recording studio for everyone from Bob Dylan to U2. After the recording studio closed, the Teatro was briefly home to a church, but currently is vacant.

In the latest blow to a downtown struggling to revive itself, Oxnard’s cornerstone movie house has closed. Poor attendance and a recent drop in the production of Mexican films caused the demise of the Teatro Boulevard, the only Spanish-language theater in Ventura County, owners said. “It’s a tired old theater and there’s not much product anymore,” said general manager Jose Romo. “People just stopped coming.” In its heyday, the 65-year-old brick and stucco theater on Oxnard Boulevard drew large crowds of recent immigrants and migrant workers, Romo said. “We had romance, comedy, mariachi-oriented pictures,” said Romo, who managed the theater for 25 years. “For many people, it was the main source of entertainment.” Daniel Masias, 42, remembers going to the theater as a child. “Me and my friends would ride our bikes from El Rio every Saturday,” he said. “We loved seeing the cowboy movies in Spanish.” Although Masias said he is sad to see the theater close, he said he prefers watching movies on his videocassette recorder at home. “It’s cheaper and more convenient,” he said. “I don’t come downtown that much anymore.” A few blocks away, Bernardo Castellanos, owner of Fifth Street Video, said his business is up 20% since the theater closed a week ago. “Almost all of my business is Spanish,” he said. “Since the theater closed, everyone is coming here.” Metropolitan Theaters Corp., which operated the 750-seat Teatro, runs about 15 Spanish-language theaters throughout the Southland, Romo said. The Oxnard theater shutdown is the most recent in a string of half a dozen closings over the last several years, Romo said. The company is seeking a tenant to sublease the property until its lease expires in January, 1995. Oxnard Councilman Andres Herrera, who remembers dancing the polka in a performance onstage at the theater as a child, said the closing hurts the ailing downtown area. “Things are difficult everywhere, but the closing is especially unfortunate for that area,” said Herrera, who runs a business near the theater. “It’s another space we need to fill as we work to bring business back downtown.”

Although the theater falls within the bounds of a 50-block area of Oxnard targeted for urban renewal, the city has “no immediate plans for that building,” said Dennis Matthews, administrator of the city’s Redevelopment Agency. Meanwhile American Family Theatres plans to reopen a three-screen movie house at the Esplanade Shopping Center in May. The theater will show second-run movies at a reduced price, said company president Tom Brand.

You can see some of the theater in this film, I would assume;
http://tinyurl.com/5soap8

Does anyone know what the inside of the theater looks like now? Are there still theater seats and a big screen or is it completely gutted out?

There are not many features left inside. The seats had been removed and the floor is now level. It has potential for a creative use post production studio,music studio or sound stage. The is a stage inside
and the building is 7500 square feet.

Am looking for a small old ticket booth for the front lobby area. I will post some photos when the neon is restored. If any one has photos other than the ones posted on this site please contact me at

Article on the future of the Teatro in the local alt-weekly:
View link

Looking for old photos of this theater. Need to restore the neon & wonder if there are any photos people have? Thanks in advance