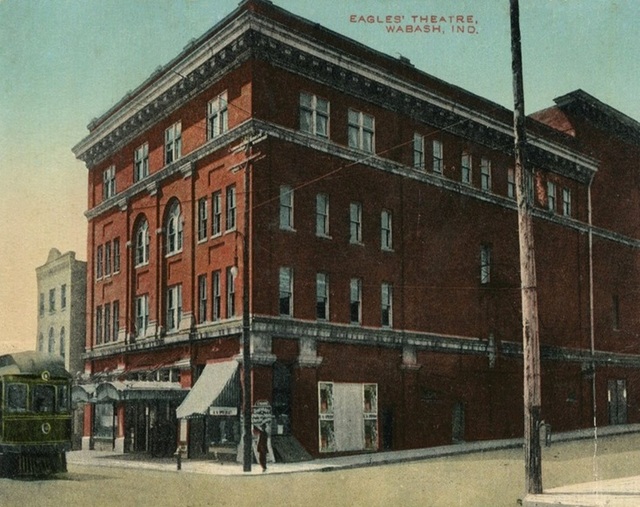 Originally opened March 30, 1906, the Eagles Theatre was built as a vaudeville theatre. It was renamed Yarnelle Theatre by 1914 operating a a full time movie theatre, but returned to the Eagles Theatre name by 1918. In the late-1920’s it was remodeled by architect Alvin M. Strauss and had switched to movies by the 1930’s. Alvin M. Strauss carried out further remodeling in 1939, when it was redecorated in the Art Deco style.

The Eagles Theatre boasts one of the largest screens remaining in Indiana, has two balconies and a ballroom. It was closed for renovations & restoration in 2018.

The Eagles Theatre was added to the National Register of Historic Places in 1985.

There was also a Crest Theatre on Market Street, in addition to the Eagles and the Colonial. But I haven’t been able to find any other information on it, other than a 1955 photo on the Wabash Memories Facebook page. If anyone can find an address or build date, I’ll set up a CT page for it.

Here is an early interior photo of the Eagles Theatre.

The NHP registration form for the Wabash Downtown Historic District says that the Eagles Theatre opened on March 30, 1906. The house was leased to the Dickson Brothers in 1913, and they bought the building in 1917, operating the theater through the 1940s. William and Percy Dickson also owned the Colonial, Orpheum, Family and Dreamland Theatres in Wabash, according to the December 15, 1917 issue of Motography. As of 1912 they had also owned a house on Wabash Street called the Princess Theatre.

For some time in the mid-1910s the Eagles was known as the Yarnelle Theatre, which is how it was listed in the 1914 Gus Hill Directory. The 1914-1915 American Motion Picture Directory double lists the house under both names. By 1918 the name had reverted to Eagles Theatre.

Papers of the Fort Wayne architectural firm Strauss Associates indicate that A. M. Strauss planned alterations for the Eagles Theatre twice, once in the late 1920s and again in 1939.

The Eagles Theatre is currently closed and undergoing major renovations. Among other changes, a second screen will be added to the house in a 40-seat auditorium to be carved from part of the basement. The main auditorium, recently seating only 450, will be expanded to 550 seats by reopening the balcony. The stage facilities will be upgraded to accommodate live events as well as movies. Upper floors of the building will have rooms for various purposes, including audio and video recording facilities and meeting rooms. The restored fourth floor ballroom, long derelict, will host events seating up to 200. Reconstruction began in late 2017, and is expected to take between 18 months and two years.

More details about the project here.

The AKA is almost certainly Yarnelle, not ‘Yarnell’. There was a Yarnelle Lumber & Coal Co. in town.

From the NRHP listing for downtown comes the following information: The Fraternal Order of Eagles started construction on the building in July, 1905. While the theater and office rental space were successful, the building was sold at public auction in 1912, and was renamed the Yarnelle Building. (This also explains why the 1910 and 1920 Sanborns show the meeting hall being an Elks lodge, not an Eagles aerie.) The theater space was leased to the Dickson brothers (William and Percy) in 1913. They bought the building in 1917, presumably changing the name of the theater back.

Yarnelle is indeed the spelling used in both the Gus Hill guide and the American Motion Picture Directory. I’ve found the name used in local publications during the years 1913, 1914 and 1915.

The Eagles Theatre is now operated under the auspices of the Honeywell Foundation, and has a new web site here.

Needless to say the July, 2020 target for reopening was missed. The earliest live performance currently scheduled for the Eagles Theatre is February 25, 2021, but personally I wouldn’t bet on it. No movies are currently scheduled, but management is hopeful that they will return this year.

Oops, forgot the other thing I was going to link to. This article posted by input Fort Wayne in 2018 starts with the Clyde Theatre in Wabash, but then continues with the Eagles Theatre. There are several photos showing the renovations underway in both the theater and other parts of the building.