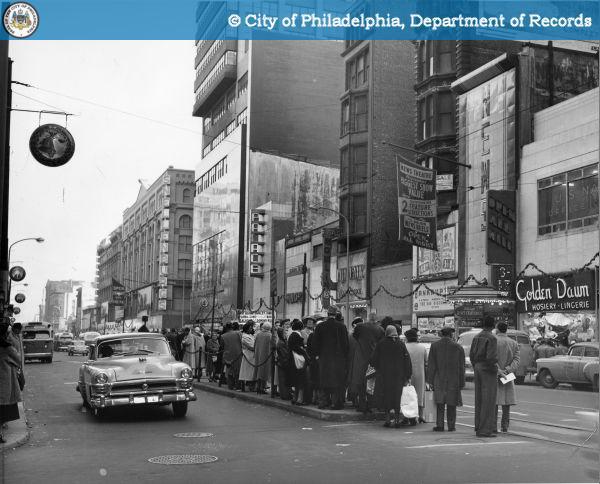 Architect William H. Lee designed this small, 400-seat Streamline Moderne newsreel theatre which opened on November 20, 1937 on the 1200 block of the south side of Market Street East. A sign proclaimed “Open All Night”. This was one of downtown Philadelphia’s two newsreel theatres, the other being the Trans-Lux Theatre(listed as Eric’s Palace Theatre on Cinema Treasures) at 1519 Chestnut Street.

Box Office of August 20, 1938 reported that Goldman’s News Theatre was showing re-issues of films. William Goldman was a local movie theatre exhibitor. Motion Picture Herald, March 15, 1941 reported that since 1938 “the News Theatre offers a two-hour program, changed weekly, of a feature picture revival and a 25-minute giant newsreel, edited from all five newsreels. The house is open from 10am to 11:30pm weekdays, 10am to 12 midnight on Saturday and 2pm to 12 midnight on Sunday. Charging 15 cents until 6pm and 25 cents (plus tax) in the evening. War news is the chief attraction, according to the management, but interest is equally keen when there is some item of special importance. Moreover, during the football season news shots of the principal games are as popular as war happening”.

Like its Market Street neighbors the Palace and the Family aka Apollo, the News played out its last years as an all-night grind house showing B movies and eventually adult features. It had a very narrow frontage on Market Street, with the name “NEWS” spelled out vertically in tile above the entrance. Demolished along with the Palace and several other structures to make way for the 1234 Market office building.

When I worked night shift for a railroad from 1969 to 1972 I would often go to one of Philly’s 4 all night theaters after work at midnight. The News looked so dark and creepy I never went in, going only to the Palace, Center and Family (which was pretty creepy itself).

I recently came across these articles in MOTION PICTURE HERALD March 15, 1941. One describes how newsreels were promoted to the public before TV let us see the news at home.

The News theatre, owned and operated by William Goldman in downtown Philadelphia devoted to newsreels and feature picture revivals, will be the second house in the city to go on a 24-hour continuous policy. Some six years ago, Warners instituted an all-night operating policy for the circuit’s Family theatre, which was destroyed by fire Sunday. Special added attractions for the after midnight showings will be inaugurated at the News, with the policy expected to get under way by Easter.

In Philadelphia, there are two center-city theatres dedicated to the newsreel. The 493-seat Translux, operated by the Translux Movie Corporation, and managed by Harry Jordon, opened in January, 1935. Hourly programs are presented with the admission “always 25 cents” (plus tax), from 10:30 A.M. to 11:30 P.M. daily, 10 A.M. to 12 midnight on Saturday and 2 P.M. to 12 midnight on Sunday.

Four newsreels are edited to form a half-hour review and four shorts complete the program. Newsreels are changed twice weekly and shorts once a week.

The editing of the newsreel follows a regular pattern, first emphasizing foreign news, then local, national defense and sports. Since the advent of the European war, news shots of the conflict have taken prominence. However, according to the management, in recent weeks, not much has been coming through to satisfy the patrons. First pictures of a battle or invasion are advertised by one-sheets in front of the house. Blow-ups are used for regular advertising. When war newsreel pictures are unusual special attention is given, as the pictures of the incendiary bombing of London were sold as “The Burning of London.”

The other Philadelphia newsreel house is the News Theatre, operated by William Goldman Theatres, Inc., independent circuit. Seating 385, the house was first opened in 1937 with a policy similar to that of the Translux, offering shorts and edited newsreels. The following year, the house experimented by featuring a revival instead of the short subject. This proved so successful that it was adopted as a regular policy. As a result, the News offers a two-hour program, changed weekly, of a feature picture revival and a 25-minute giant newsreel, edited from all five newsreels. The house is open from 10 A.M. to 11:30 P.M. weekdays, 10 A.M. to 12 midnight on Saturday and 2 P.M. to 12 on Sunday, charging 15 cents until 6 P.M. and 25 cents (plus tax) in the evening.

War news is the chief newsreel attraction, according to the management, but interest is equally keen when there is some item of special importance. Moreover, during the football season news shots of the principal games are as popular as war happenings.

In January Warner Brothers gave special attention to the newsreel at two of its second run houses in the downtown area, the Karlton and the Palace. A 25-minute digest from the five newsreels is presented and advertising follows the headlines of the day.