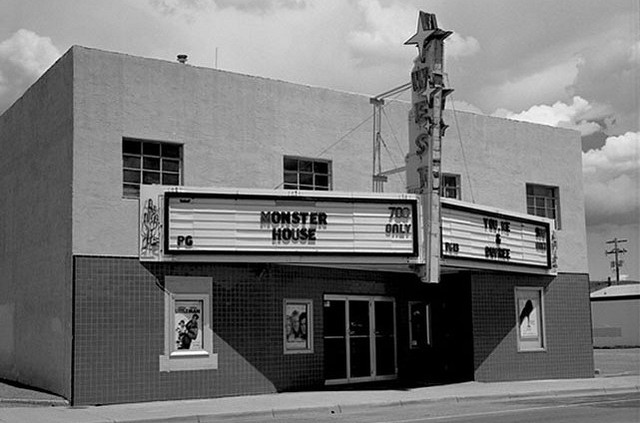 The West Theatre is the last of the three theatres in operation in Grants. The West Theatre was originally to be named El Sol Theatre and four walls were built by owner C.E. Means. It was taken over by J.C. West who completed the theatre named it after himelf. It opened in April 1959 as a single screen theatre and was later converted to a twin. The balcony was converted to the second screen.

It is located on W. Santa Fe Avenue (Old Route 66) at 1st Street. The theatre is a two story building with the top portion painted an off white and the lower section at street level painted a burnt orange. It has a small V shaped marquee with a vertical spelling out “West” and a large flashing star on the top.

The West Theatre plays first run attraction in both auditoriums.

It’s about a block east of the Lux.

Here’s a 2006 view of the WEST: http://www.rushcreekgallery.com/lfop/index.html

The West Theatre apparently turned fifty years old this month. The May 18, 1959, issue of Boxoffice said that it had opened recently. The opening features were “Tarawa Beachhead” and “Crash Landing.” Boxoffice reported the cost of the new theatre as $125,000.

The owner of the West Theatre was J.C. West, Grants' theater magnate. He bought the Lux Theatre in 1950, and built the Sahara Drive-In in 1958. He also operated the Trails Drive-In at Grants.

Mr. West bought the Lux and the construct of four walls that was to be the El Sol theater from a Mr. Means. When the second theater was complete it was named the West theater. The two drive-ins Mr. West built were the Trails and the Sahara. Prior to coming to Grants, Mr. West built a drive-in in Big Spring, TX circa 1948. The base of the screen tower was home to him and his family.

Back in 1947 when C. E. Means, owner of the Lux Theatre, announced plans to build a new theater in Grants, the October 11 issue of Boxoffice said that the new house was to be designed by Albuquerque architect Gordon Ferguson.

Given the fact that only the walls of the new theater were built until J. C. West completed it in 1959, I don’t know if Ferguson’s original plans were used for West’s completion or not, but he might have been involved in the project at that final stage as he continued to practice in Albuquerque into the 1970s.

I wish I knew the answer to the name of the builder or architect. I wouldn’t know how to find out. There was another theater built for Mr. West in the early 1970’s. It was called the Cinema East and sat where the US Post Office is now at Candelaria, just east of Eubank. I have no pictures of it and never stepped inside. It was a two screen, but the multi screen theaters were coming into their own and business at the Cinema East was poor. During this time, some of the theaters in Grants were still in operation. I appreciate your input!