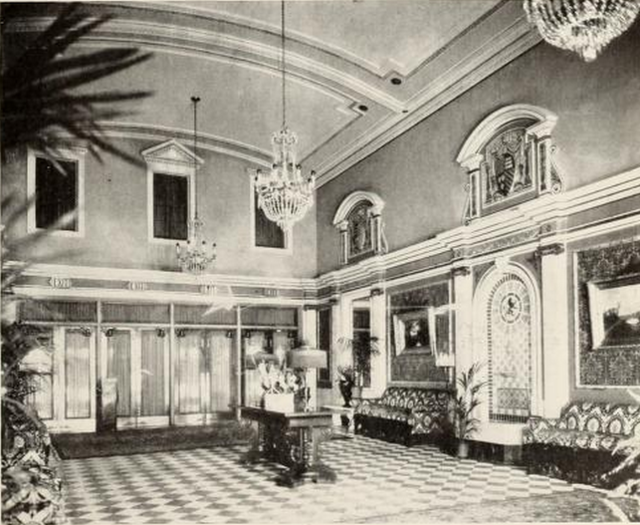 The Roosevelt Theatre opened in September 1926 on Frankford Avenue near Oxford Avenue, on the same block as the Frankford Theatre. The Roosevelt Theatre could seat 1,901, all on a single floor, and was designed by the firm of Hodgens & Hill (who also designed the Frankford Theatre and a number of other theatres around Philadelphia). The proscenium was 49ft wide. It was equipped with a Hope-Jones Wurlitzer 3 manual organ. Initially operated by the Freihofer chain, but soon after opening it was taken over by Paramount Pictures Inc. through their subsidiary Quaker Theaters Corp. The Roosevelt Theatre closed in 1962. It was gutted and converted into office & retail use, which had closed by 2014.

The Roosevelt Theatre is still standing, along with Stanley Warner’s Circle Theatre, which was one block south. The Frankford Theatre was demolished, and a now-vacant Pearle Vision center stands in the Frankford’s site.

I beleive at one point, The Roosevelt and The Frankford were owned by Stanley Warner Theatres, who also owned The Circle Theatre, The Allegheny Theatre, and The Midway Theatre (all which were near the PRT/PTC/SEPTa Market-Frankford Line)

Stores are now where the lobby was once located.

I recall the inside of the theater had little fake porticos all around the sides, making it look like there were small loges or balconies. I saw “Gone with the Wind” here on a re-run sometime in the 50s.

was this the theater that closed and was a Sears Surplus store in the 70’s and 80’s?

My paternal grandmother played the organ for silent movies at the Roosevelt Theatre during the theatre’s early years. Cathryn Bircher Cooper. She’d studied music in New York. She had to improvise to what she saw on the movie screen. I never met her. She died in her mid 30’s in the mid-1930’s when my father was a boy.