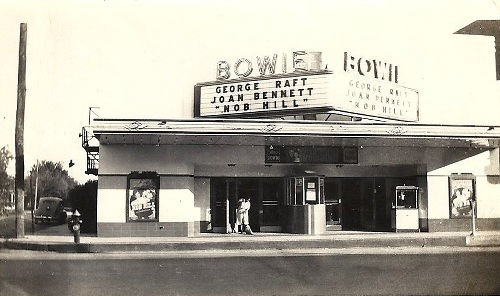 The Bowie Theatre opened March 28, 1941 with Rita Hayworth in “The Strawberry Blonde”. Seating was provided for 849 in orchestra and balcony levels. This was a really nice Art Moderne-style theatre, built for and operated by the Interstate Theatres Inc., although listed in 1943 as being operated by Paramount Pictures Inc. through their subsidiary Hoblitzelle & O'Donnell. The building inclined down from the front to the stage house. The theatre had a small stage.

The theatre closed on February 12, 1974 with Tom Laughlin in “Billy Jack”. It became a custom picture frame shop. In recent years it has become a hospice.

The frame store website now gives the location of 408 Center, so it looks like they moved across the street. A hospice is currently being advertised at the 413 location. I’m not sure what that function would be. Kind of a sad end for the theater, though.
http://tinyurl.com/6ekdy7

This article was in the Brownwood Bulletin in March 1960:

Tharp said a special program is being planned for Friday. Dr. Mollie Armstrong spoke for the formal opening in 1941 and special guest was Maj. Gen. Walter Krueger, commander of Camp Bowie. He was introduced to the audience by Dr. Armstrong. Interstate circuit officials were present.

Reed said opening ceremonies began at 7 p.m. and that an hour and 10 minutes later the theater was full and theater officials closed the box office. â€œOur big problem was handling the crowd,“ he said. He added that during Camp Bowie days the theater was run all night to take care of the crowds. A theater party was held after the opening at Hotel Brownwood for company officials, press, and civic leaders, he said. Reed said the theater opened with "about half the needed equipment but experienced no difficulties.” More equipment was added later.

Since its opening, Reed has seen a number of changes in the Bowie â€" including cinemascope, stereophonic sound, and large screen. First Bowie screen was 18 feet high by 20 feet wide. Present screen surface is 22 feet high by 35 feet wide. Other changes include what Tharp calls “a redecoration and beautification campaign.” Redecorating has taken place during the last two months, Tharp said, and include painting the lobby, auditorium, and rest rooms, and the addition of 125 new seats In the auditorium.

Five persons have managed the Bowie since its beginning in 1941, according to Reed. First manager was Lee Bray who served four years. He was followed by Oscar Dooley who came to Brownwood from Dallas. The late J.T. Hughes was manager of the theater after Dooley. Hughes was succeeded by Jack Hendrix who managed the theater until about two months ago when Tharp became manager. Hendrix came to Brownwood from Big Spring. Tharp, in his 20th year with Interstate Theaters, came here from Abilene.

Advertisements for the Bowie Theater continued through the November 1966, but none in 1967 or past that date. 1966 is most likely the closing year.

I guess I have to retract that. A May 1970 article in the Abilene Reporter-News mentioned that “Midnight Cowboy” was playing at the Bowie in Brownwood earlier in 1970. The story concerned the arrest of the manager at the Bluffview Drive-in in Brownwood for showing the X-rated film.

From 1944 a photo postcard view of the Bowie Theatre in Brownwood.

The February 12, 1974, issue of the Brownwood Bulletin said that the Bowie Theatre would present its last show that night. Interstate Theatres would continue to operate the Cinema Twins and two drive-ins. The final movie at the Bowie was “Billy Jack”. The house had opened on March 28, 1941 with “The Strawberry Blonde” starring Rita Hayworth and James Cagney.