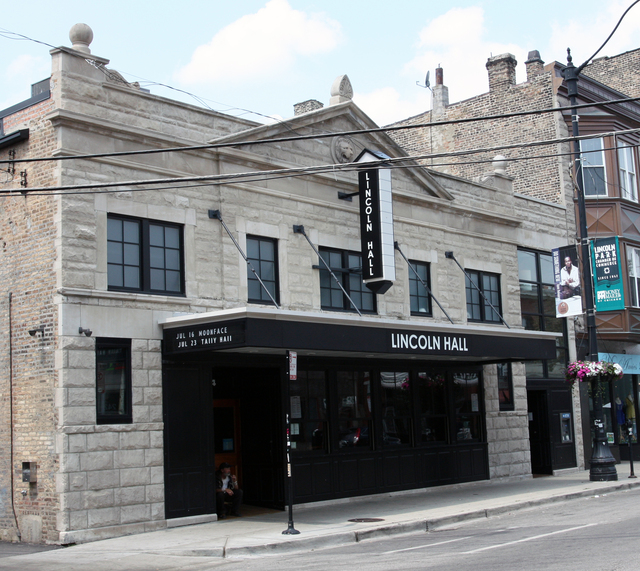 Directly across N. Lincoln Avenue from the much more famous Biograph Theatre, where John Dillinger was killed, sits the 3 Penny Cinema, which has been around just as long.

Opened in 1912 as a nickelodeon called the Lincoln Theatre, it became the Fullerton Theatre from 1914 to 1916. The building afterward was converted into a garage and machine shop. It was reopened in the late-1930’s as the Crest Theatre. Among its historical highlights was the hosting of FBI sharpshooters on its roof who sought to prevent John Dillinger’s escape from the Biograph Theatre on the opposite side of N. Lincoln Avenue. On May 29, 1968 it was renamed 3 Penny Cinema and is often remembered with dubious fame as the site of the Chicago premiere of “Deep Throat”. By December 1971 it had been renamed Capri Theatre, before later going back to the 3 Penny Cinema name.

Though neither ornate or a palace by any means of the imagination, the theater was one of Chicago’s more popular movie houses. The decor was minimal, but the exterior still retained an antique ticket booth and fragments of its original Neo-Classical facade.

The auditorium, which once housed about 500, was divided into two screens in 1989 with one seating about 230 and the other seating 120.

The 3 Penny Cinema was unfortuntely closed in June of 2006 by the city of Chicago due to its owners non-payment of amusement taxes, ending the movie-going experience on this stretch of Lincoln Avenue dating back to the early decades of the 20th century. The Biograph Theatre closed in 2004 and is has since been transformed into a live theatre venue owned by the Victory Gardens theatrical company.

Scaffolds are now down. The front of building’s first floor is still covered up during whatever remodling is ongoing. However there are new Marvin windows installed on the second floor overlooking Lincoln Ave. Shouldn’t be much longer.

If I remember correctly, they had the 3 Penny outfitted to look like a hotel for the filming of “Public Enemies. They hung a retro distressed neon HOTEL sign over the doorways in DarkRefrain’s above picture.

Shaping up nicely. Good to see they tore off that ugly wood facade.
Must be big money into it by now.

Looks like the lost the proscenium and terrazzo somewhere along the way, too bad. Otherwise it looks like an awesome venue

Another article about the former 3 Penney’s conversion to a concert venue:
View link

A recent article about events, including free movie showings (probably video or digital projection) at Lincoln Hall, including a picture of the exterior as it is now:
View link

December 25, 1971 Tribune movie section, showing it was named “Capri Cinema” at that time. So it reverted from and back to 3 Penny Cinema again after that. Should be added to the Overview.

Here is a post with rare interior photos of the 3 Penny before it was completely gutted. The Lincoln must have been an unusually elaborate nickelodeon in its day.

The members of the FBI who killed John Dillinger, did it from the roof of the Lincoln Hall(then called Fullerton Theatre).