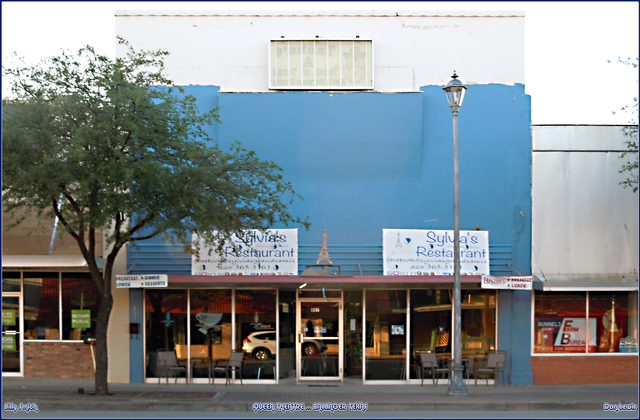 One of three theatres that once operated in downtown Ballinger, the Queen Theatre was opened by 1914. It was closed around 1936 and has long been converted to retail. It is a western wear store. What was once a striking white stucco front is now a bright pink building. The entrance has been redone to where there are display windows where the theatre entrance once was.

Wonder what is upstairs?

The Queen was one of three movie houses in Ballinger that was mentioned in an item in the July 1, 1916, issue of The Moving Picture World:

“Ballinger, Tex. — Two picture houses in Ballinger have been consolidated recently and now operate under one management. Roy Reeder, who operated the Princess theater and the White City airdome, and D. Cohen, who managed the Queen theater.”The Queen was also one of two houses listed in the 1914-1915 American Motion Picture Directory, though no address was given (the other house was the Cosy, 127 Seventh Street.) The Queen was listed in issues of Film Daily Yearbook in the later 1920s, but always with 400 seats.

The Queen was still listed in the FDY from 1937 through 1943, but with only 300 seats, and always listed as closed. It vanished from the listings in 1944. I suspect that the Queen was closed when the first Texas Theatre opened in 1936, and never reopened. The streamline modern facade on the building now probably dates from the building’s conversion to retail use sometime in the 1940s.

The Cozy Theatre is mentioned in the February 1913 Ballinger Daily Ledger with the words “Cozy Theatre, everything new but the name”. General admission was ten cents. There was an elevated floor with opera chairs.

The Ballinger Ledger of June 25, 1936, ran a special section about the new Texas Theatre which was set to open the following day. Among the articles in the section was a biographical sketch of the theater’s co-owner W. D. Scales. It says that Scales came to Ballinger in 1920 and took over the Maeroy Theatre, which was on Hutchings Avenue, and a few years later teamed up with H. T. Hodge to build the Queen Theatre on North Eighth Street.

If this is the case, then the Queen Theatre operating in 1914, on Hutchings Avenue, must have been a different house. The 1936 article also says that Scales & Hodge’s Queen on Eighth Street was on the site of the first Texas Theatre, and thus was demolished when that house was built in 1936. I’m still trying to puzzle out the history of Ballinger’s theaters, as we seem to have gotten quite a bit wrong about them, but information about them is pretty thin on the Internet.

In the 13 September 1932 issue of the Ballinger Semi-Weekly Ledger, it mentions that the Queen Theatre is re-opening after being closed for several months.