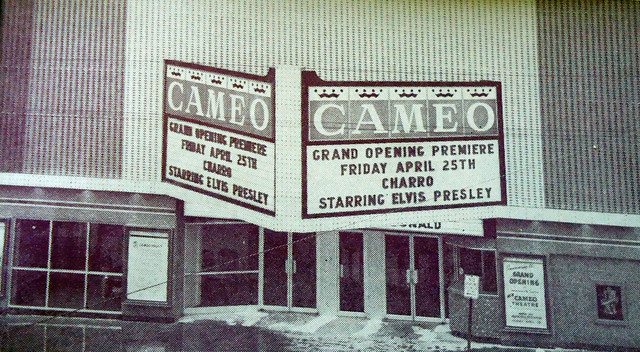 There is a picture of the Avenue at the Wyandotte County Museum. The information:

Conversion of the Avenue Theatre into the Cameo Theatre by the Commonwealth circuit took place in 1969. The May 19 issue of Boxoffice said that the changes included a radical floor redesign and a complete redecoration. A new facade was installed as well. The architects for the project were Commonwealth’s usual choice, Milton Costlow & Associates.

From 2010 a photo of the Avenue Theatre buildiing in
Kansas City.

Thanks for the modern photo Don.

thanks too,Don.Wonder if any One-sheets are in There?

Montgomery Wards was right next door back in the day. My dad slipped on some ice and broke his arm. Saw a few movies here back in the 70’s while it was the Cameo.

Closed as the Cameo by Commonwealth on Sunday, January 2, 1977, showing a Rudy Ray Moore (Rudolph Frank Moore)/‘Dolemite’ double-feature of 1976’s THE HUMAN TORNADO and his self-titled debut from 1975, DOLEMITE. (Kansas City Star)

I just took a trip back home to Kansas City, MO from Connecticut and took a drive downtown Kansas City, KS and was disappointed to see a vacant lot where the Avenue Theater once stood. I know it was closed for many years after being used by a church. However, it was not really changed in side with the exception of the movie screen, framing and the speakers being removed so the stage are could be more multi-purpose. When I moved to CT 3 years ago, I was informed that a real plan to clean up the old Avenue (later Cameo) Theater and to begin showing movies again – most likely Spanish Produced movies was almost a done deal. The biggest expense was going to be the purchase of all digital projection equipment and outfitting the stage area with a new screen and speakers. I actually was able to take a look inside before the wood protections were put in place. The theater was in very good shape with some lite water damage in the ceiling. The seats were all there and even the last remaining curtain and rig. It would have been very easy to spruce up this single screen gem still standing in the KC Metro. Not sure why this effort fell apart and the gov did not get behind it. I also noticed that the Granada Theater re done about 7 years ago has received a new facelift and seems to be a multi-use Spanish Church related venue with the capability of still showing movies but no digital projection equipment according to a man coming out of the Granada. I think Kansas City, KS gov made a huge mistake to not save the old Electric Theater which was very similar to the KCMO Folly and Orpheum Theaters inside. It could have been a wonderful live performance theater incorporated into all of the re-development in the that two block area. Seems like it is always the theaters that get demolished. Saving the Avenue as a real Community Theater would have been a very smart move.