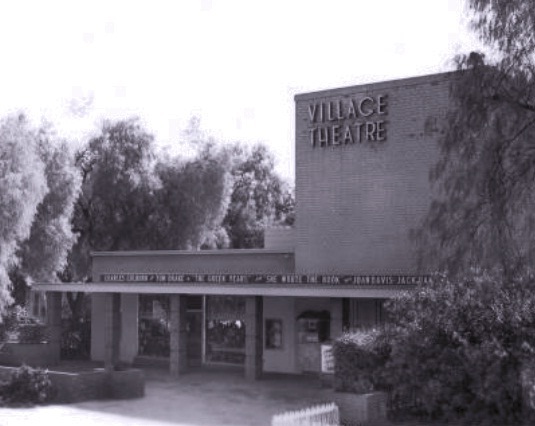 The Village Theatre was designed by Sumner Spaulding, a prominent Los Angeles architect, best known for his design of Green Acres, the estate built by silent-screen legend Harold Lloyd. Spaulding’s firm also is credited for the Avalon Theatre on Santa Catalina Island.

Preliminary 1939 plans showed that the Village Theatre was to contain 500-600 seats and up to six stores. Located in Old Town Claremont, it opened on January 17, 1940 with Will Fyfe in “To the Victor”. It was a Fox West Coast Theatre for many years and was closed in 1979. It is now the Harvard Square Restaurant with an antique shop occupying the former auditorium.

It’s worth a visit to spend some time in Old Town with its small-college-town atmosphere and many coffee shops and restaurants for reading the Sunday papers or browsing in the shops.

Was this known as the Claremont Theatre at some point?

I would presume the Claremont Theatre was closed around 1940/41.

Ken does that edition of the Film Daily Yearbook give an address for the Claremont Theatre?

MagicLantern;No address for the Claremont Theatre, just the name.

Incidently, there is an address given in the 1950 & 1952 editions of F.D.Y. for the Village Theatre, W. 3rd Street & Harvard Avenue. Obviously W 3rd Street has been re-named W. Bonita Avenue since then.

The Claremont was a forerunner of an arthouse as early as the ‘50s (and possibly even earlier). It played foreign films, art films, even Disney’s original “Shaggy Dog” — and “Breakfast at Tiffany’s” (on a first-run basis). It played Burton Holmes’ travelogues, the British “Carry On” movies, Peter Sellers' early movies (before he went Hollywood) … and the long, long (and badly made) musical “South Pacific.” I saw them all there as a kid.

Here is some information on the current occupant:
http://tinyurl.com/5muwp5

Construction was to start within a few weeks on the 500-seat Village Theatre in Claremont, and the house was to open on April 15, according to Boxoffice of February 18, 1939. The Village would be operated by Richard L. Bare, operator of the Filmarte Theatre in Carmel, California, and, like the Filmarte, it was to be a single-bill house booking both American and European movies. The Claremont Colleges were associated with Bare in the project, and would have supervision over the programs, which would change twice weekly.

Given the short time between the start of construction and the projected opening date, I suspect that the Village was installed in an existing building that was remodeled into a theater. The Boxoffice item confirms Sumner Spaulding as the architect for the project.

Richard L. Bare, who went on to become a director, writer, and actor for movies and television, is apparently still living.

It’s probably not the Claremont Theatre of the early 40s but there was another one in Claremont listed in the 1919/20 city directory:

The College Arms Theatre might be the house mentioned in the November 15, 1913, issue of Southwest Contractor and Manufacturer, which said that bids were being taken for construction of a theater at Claremont that had been designed by Pomona architect Paul F. Higgs. The firm of Davis & Higgs also designed a theater at Pomona in 1911, but I’ve been unable to discover which one it was.