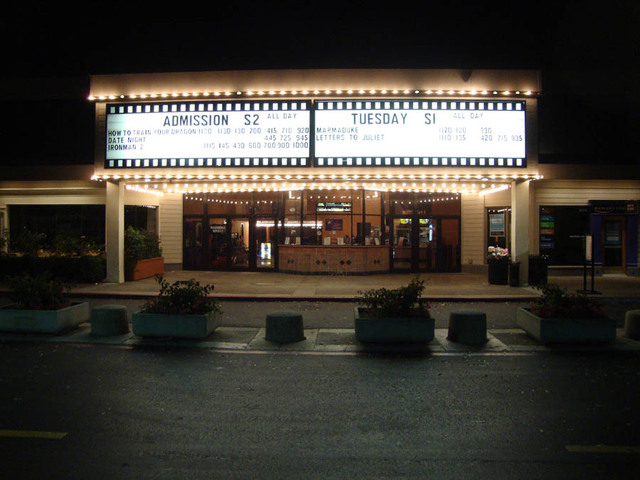 Rumor has it that Edwards “stole” this five screen complex from Mann Theatres just before it officially opened on February 8, 1980. Edwards added Dolby Stereo to all 5 screens in the 1990’s.

Todd Blood, of Captain Blood’s Village Theatre fame, took over the lease in 2001 after Edwards shuttered it as part of their bankruptcy. Todd Blood added digital sound in all but one screen, and the lobby got a make-over. All five screens remained at a fixed 2:1 apect ratio, which crops movies (1.85:1 is overly cropped top and bottom, and 2.35:1 is severely cropped on the left and right.

In the Spring of 2005, Captain Blood lost the lease. Starplex Cinemas renovated the theater and operated it as a second run theatre. It was taken over by AMC in January 2016.

The wife & I watched Scream Factory’s new 4K UHD/Blu-ray release of the 1980 cult flick “Alligator” last night & while perusing the advertising extras found a print ad listing the Woodbridge as a featured theater opening day back in November of ‘80.

Never saw the film in theaters as a kid but remember those great TV spots with the alligator busting through the sidewalk. They’re on the disc as well.

Looks like the Woodbridge continues to operate with just two screenings a day per movie, with none starting before 4pm, even on weekends.

Kind of sad neighborhood kids really don’t get to experience Saturday matiness like I did at the Woodridge growing up. Can’t imagine not having a noon or 1pm show to ride my bike to with friends, as it remains a very fond memory of my youth. Glad I grew up when I did.

Weekend matinees have returned to the Woodbridge, as a quick check of the schedule for April 2 & 3 show at least a 1-1:35 PM start time for all four films.

Looks like the Woodbridge has ceased weekend matinees again as the schedule for April 23-24 shows only two screenings of each film per day with none starting before 4PM.

Starring Harrison Ford, Sean Young & Rutger Hauer, the film opened at number two (behind juggernaut “E.T.”) on 1,295 screens with high hopes of being a major summer release for Warner Brothers & The Ladd Company. Unfortunately, it was not an initial hit, remaining in the top ten for just three weeks before seeing its theater count slashed in half the next week. It finished the year with a gross of $27 million against a $30 million budget.

It wasn’t until Scott released his Director’s Cut in 1992 that the film was embraced by critics & audiences alike, mainly on home video, and anointed a “classic.”

I was just 11 years old and couldn’t convince my mom to let me see the R-rated “Blade Runner” in ‘82, but I do remember it adorning the marquee at the Woodbridge & flipping through the official souvenir magazine at the nearby drugstore that eventually became the Barnes and Noble.

Starring Jeff Bridges, David Warner & Bruce Boxleitner as the titular hero, the film debuted at number two (again behind “E.T.”) on 1,091 screens and was considered Disney’s event film for the year, complete with storybooks, action figures and its own arcade game.

Unfortunately, like most films that summer that didn’t feature a stranded space alien, it failed to find a foothold, dropping out of the top ten after just three weeks & seeing its theater count slashed in half within a month. It ended its run with a gross of $26 million, against a $17 million budget, finishing the year as the 26th highest-grossing film of 1982.

Like “Blade Runner & "The Thing,” “Tron” developed a cult following on home video where its unique, groundbreaking cinematic contributions (it was basically the first film to use extensive CGI) were studied & extolled by new generations of cinephiles over the years. A successful sequel was eventually made in 2010 (“Tron: Legacy”) with another film in development.

I saw “Tron” as an 11-year-old opening weekend at the Woodbridge, the same theater where that eponymous arcade game would rob me of so many quarters the next two years of my life.

Who closes for renovations in the middle of summer? I guess when your opening at 4 pm & only using two of five screens it really doesn’t matter.

Regal, Cinemark and AMC here in Asheville NC did that when they were installing the recliners. It was summer and Christmas time.