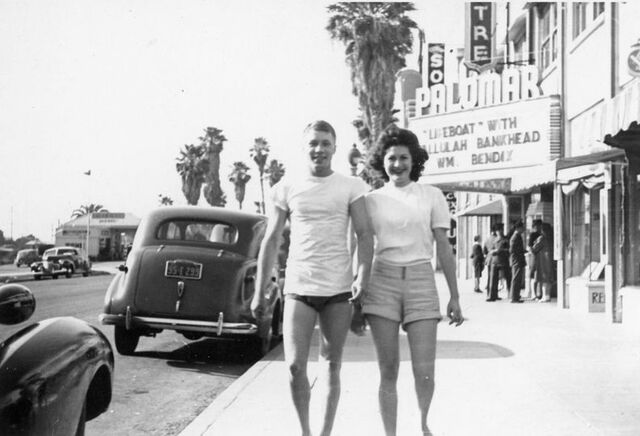 The Palomar Theater was opened on December 10, 1924. In 1936 it was redesigned by architect Clifford A. Balch and engineer Floyd E. Stanbery.

Paul, You are correct about both the year and the architect. The theater was opened in 1924 and R.E. Struve built it. Struve also built the Calrsbad Village Theater in downtown Carlsbad in 1927.

Contemporary sources quoted in the California Index mention two proposed theatres in Oceanside in 1936, involving two operating companies. Fred Siegel’s Palomar Operating Company hired Clifford Balch to design a theatre to be erected on Hill Street (now Coast Highway) between Topeka and Michigan Streets (Southwest Builder & Contractor, 1/17/36).) As 314 N. Coast Highway is about three blocks north of that location, unless the street numbers have been changed I don’t see how that proposed theatre could be the Palomar.

I can’t find any numbered streets on a current map of Oceanside, but the second 1936 theatre project in that city was supposed to have been at Hill and 3rd Streets. It was a project for the Inter-Counties Investment Company, of Anaheim, and called for the remodeling of an existing building. Plans were to be by Cliff Balch’s usual partner, engineer Floyd Stanbury, apparently working alone, as he did on a few occasions (Southwest Builder & Contractor, 3/17/36 and Southwest Builder & Contractor, 6/19/36.) Given that the address of the Palomar today is 314, it seems possible that Pier View Way was once called 3rd Street, and this possibility is probably what led to the surmise that the Palomar was this 1936 project.

As the Palomar dates from 1924 (as this article in Sign On San Diego indicates), then neither Balch nor Stanbury had anything to do with this particular theatre, unless one of them designed the mid-1930s renovation mentioned in that article.

I have found no information on whether or not either of the two 1936 theatre projects mentioned in Southwest Builder & Contractor were ever carried out.

Correction: Clifford Balch’s partner’s surname is spelled “Stanbery” (an “e” but only one “r”) in 20 California Index cards, including the one to which I linked above. Stanbury, with a “u”, is a close second, appearing in 16 cards. Southwest Builder & Contractor uses both spellings in different articles. Another periodical called West Coast Builder uses only Stanbury. The Index contains two citations from Los Angeles Times articles, and both of these use Stanbery. I think the wisest course would probably be to go with the L.A. Times. The usually reliable ArchitectDB uses Stanbery as well.

Incidentally, none of the cards in the Index use the double-r spelling Stanberry, which Cinema Treasures currently uses. We should probably get rid of that.

OK, I just checked the page for the Sunshine Brooks Theater and was reminded that it was apparently the project Floyd Stanbery designed for an existing building in 1936.

Here is an item in Boxoffice magazine, October 1963:

Skip Reagan has taken over the booking and buying chores for the Palomar, Town, Star and Crest Theaters in Oceanside for John and Robert Siegal.

Here is another photo from the same date:
http://tinyurl.com/cztlm7

Here is a night shot:
http://tinyurl.com/c4dw9t

wow, you can see the star theater showing the house where evil dwells..