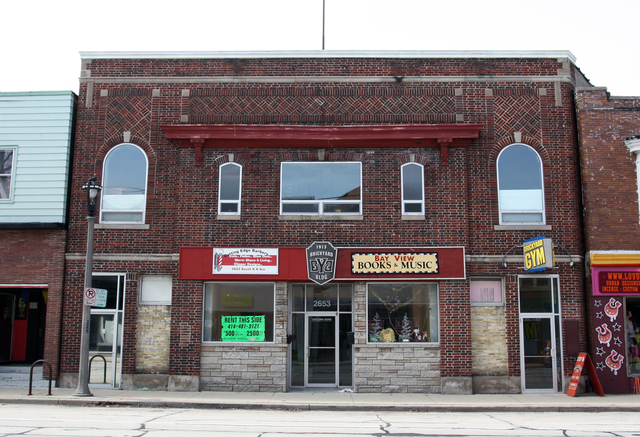 The word ‘Mirth’ means “gladness and gaiety, especially when expressed by laughter” according to the American Heritage Dictionary, so that may have been the reason for the characterizing title of the movie house in the southern Bay View section of Milwaukee, but we may never know exactly. It is known that this simple neighborhood movie house did start in 1913 as a small frame structure by an unknown architect, but years later in 1925 local architect William Buscher was contracted to demolish it and begin anew on the same footprint with a large brick building of some 870 seats. While it did have a nice copper cresting along the flat horizontal parapet line, that was about all that lent distinction to the otherwise modest edifice. There was/is some detailing with limestone blocks amidst the dark brown brick, but the six double leaf doors were surmounted only by five arched windows on the second story of restrooms and projection room. A projecting cornice still spreads above three of these windows and is supported by two modillions to lend a slightly classic look to the facade. The original marquee was only a canopy with a single line of lettering saying: “This is a Warner Saxe Theatre” with a simple vertical name sign above outlined in light bulbs.

The auditorium was likewise a standard mix of pilasters and blind wall panels of plaster with radiators under alternate panels along the wainscot line. There was never a balcony. Lights with modest half-round shades fronted each sunk panel pilaster and only six suspended bowl light fixtures adorned the otherwise plain plaster ceiling. There was a working stage, but no stagehouse and a small pipe organ of unknown make and specs, spoke through plain lattice grilles of squares that flanked the stage, high on the wall. They were slightly surmounted by a tiny drapery swag, as were the exit doorways, but there was no grand drapery on the square proscenium arch which touched the ceiling. The two aisles of the auditorium divided the 870 wooden seats, which probably remained in place until they stopped showing movies in 1952. With no air conditioning and no doubt uncomfortable seating, and the elaborate movie palace, the Avalon, only a few blocks north, the advent of television meant the end of profitability to a small cinema with no parking on busy Kinnickinnic Avenue, the main street of the old village of Bay View. Incidentally, the odd name of the street stems from an Algonquin Indian language meaning ‘mixture’ as of barks, leaves and berries to imitate tobacco, since the avenue followed an old Indian trail from Milwaukee along the lakeshore to Chicago.

The Mirth Theatre had days when it was referred to locally as the “Hitching Post” though that was never the name on the facade, since it was commonplace to show westerns there, especially to the matinee crowds of kids. It did not continue long in its original form after it closed, for it had a second floor added through what was the auditorium and served as a factory making tents for some years, and other such occupants. Years later it became a night club for a while, and that was its last income producing occupation to date. The local bank which owns it told me that they had no interest in the movie house history of this, one of their ‘properties.’

It became the new home of the local Brickyard Gym. It is ironic that this gym moved in there, since it was last occupying some storefronts in the Avalon Theatre Building a few blocks away, so maybe now the Mirth Theatre will finally find an audience that will not go away. The earthy bellows in there now may come from bodybuilders rather than cowboys, but at least the old place will not die in silence, I hope.

“DavidH” posted these two comments on another theatre’s page: The HITCHIING POST THEATRE of Hollywood CA: /theaters/1973/ and thereby shamed me into submitting the Milwaukee version of the ‘Hitching Post Theatre,’ the MIRTH here. His posts are copied here because they fill in some gaps in my narrative.

“The Hitching Post theater in Milwaukee lasted for only for a short time.
Fox Wisconsin Amusement Corp which owned the Mirth never bothered to change the name on the marquee or add any cowboy features to the decor. Within a month or two the Mirth was the Mirth again showing regular Hollywood features.
At the Pearl, Grace, Park, Midget or Mozart in Milwaukee theaters which always had cowboy pictures, whenever Andy Clyde came on the screen the audience cheered.
Was he as funny as he was in the movies when he had the job of scout master?
posted by DavidH on Dec 15, 2004 at 7:15pm

The Mirth later served as home for the Christian Science Society in Bay View. When that organization moved into its own church, the Mirth became a tavern/night club.

I used to pass the Mirth while commuting to and from work. There was a handwritten “For Sale” sign on the building. It seemed to say to me “Buy me Andy, buy me!”. I really did drive through the alley behind the building at least once, seriously looking at the building.

I never did contact a realtor, nor did I call the number on the “For Sale” sign. I finally decided I had no realistic way of paying for renovations that would be needed. I also decided that operating a first-run cinema there probably was not realistic. I wonder how much I could have purchased the building for.

It was known as “The Pour House” when it was a bar/nightclub in the 70’s.

What happened to the Golden Toned Barton Theater Pipe Organ, 2/3, manual/rank, keyboards/set of pipes, shipped from the Barton factory in Oshkosh, Wisconsin to the Mirth in 1922?