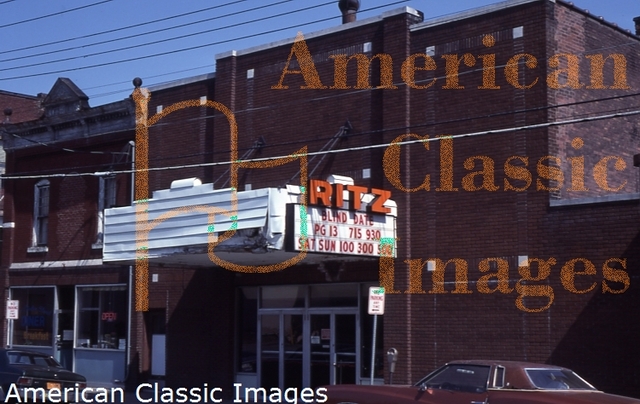 Binghamton’s Ritz Theatre opened on Clinton Street in the 1920’s. At the end it was a very plain black-box theatre. Entering in through two small doors under the overhanging three-sided marquee, the small lobby with restrooms and a small box office/concession combo gave way to the auditorium. The booth was accessed via spiral staircase in the manager’s office. The auditorium was separated from the lobby not by doors but by curtains.

One interesting thing about the Ritz Theatre was that in the dirt basement, there were two large wheels with handles on the walls opposite each other. When you turned these wheels in tandem, the pitch of the wooden auditorium floor would change. Apparently, the theatre was used for dances and bingo games (as well as movies) back in the 1940’s and 1950’s.

Loews acquired this theatre with the purchase of USA Cinemas in 1988. It transferred to an independent owner in 1991. Under the weight of heavy snow, the auditorium collapsed one morning about two hours before the first show of “Nightmare Before Christmas” was to begin. Nobody was in the building, and it was demolished shortly thereafter.

Ritz building was built in 1900 according to official records.Ther wer always apartments in the building.The Ritz building and the 3 or 4 next to all look small but that isn’t the case.The buildings all drop 3 stories in the rear and all always held apartments.Most all of the buildings next to the Ritz all held small business in the front on street level.Does anyone know if there was a business where the Ritz was located during the aprox.20 years before the Ritz opened?Thanks very much!! Tom Z

As per my post above, IIRC my research in the late ‘70s, using business directories at the Broome Library, showed the Ritz in operation from 1910 on.

In the 1960s I remember seeing Bob Hope’s Call Me Bawana and James Bond’s Thunderball.

I was the last manager of The Ritz the day she collapsed. I got a call from the owner letting me know what happened. From what we were able to deduce, the weight of the 1994 blizzard snow fall landed just right on the roof to start the timbers falling like dominoes. For those who braved going up in to the ceiling crawlspace, it was amazing. The roof was braced with timber measuring 12X12. As soon as the first one fell in the screen side of the auditorium, it was over in a few minutes. The old water tower in back stayed up and since the projection booth was built independently of the hall, it stayed up as well. It did have a severe list forward and the firefighters were afraid it would collapse too. I was shocked to see one of the rooftop HVAC units swinging in the lobby being suspended by electrical wires. We were able to get it braced and save all of the projection equipment. It was my first theatre gig. I loved going up the wrought iron spiral staircase to the booth. I hated hauling up the film cans. The basement was old foundation stone and dirt. Shelves still held decades of memorabilia that sadly was crushed. As stated above, “the auditorium collapsed one morning about two hours before the first show of “Nightmare Before Christmas” was to begin.” That is correct. We were showing Nightmare for a $1 a seat and selling out EVERY show. The house collapsed at about 9:30am. I was supposed to be in at 10:00 top start the popcorn. Doors were opening at 11:15 and first show was scheduled for Noon. Like it said…two hours later and it would have likely ended as one of the Top 10 largest losses of life in a US theatre. Amazing how fate works.

For some reason I remember seeing films in every theater in the area, that were open during my lifetime, except this one. I recall the name and location, and the first band I worked for played in bars on Clinton street a lot, but I don’t recall it even registering that there was a theater on this street. Strange.

Apparently opened as the Happy Hour Theater in January 1912 (not 1910 as I indicated above). See photo uploaded from Historic Binghamton FB page.

…or could be late 1911 as the January 8, 1912 article indicated the theater had been recently opened.

In the 1914-1915 edition of American Motion Picture Directory there is a New Happy Hour Theatre located at 38 Clinton Street.