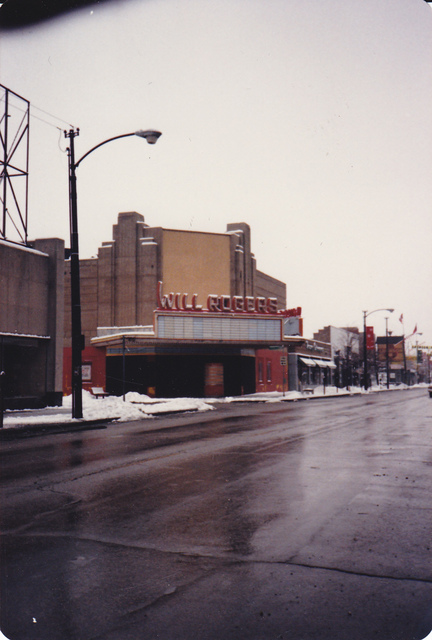 The Will Rogers Theater, opened on September 5, 1936 with W.C. Fields in “Poppy”. Balaban & Katz Corp. named it in tribute to Will Rogers, who had died in a plane crash the year before. The Rapp & Rapp designed movie house was located on W. Belmont Avenue at N. Parkside Avenue in the Belmont-Cragin neighborhood of Chicago.

The theater’s Art Deco style design was influenced by ideas featured in the architecture of Chicago’s Century of Progress World’s Fair of 1933.

Closed in 1986, the Will Rogers Theater was demolished in 1990 to make way for the strip mall which sits on the site today.

I manage a resale and just got in an old reel that was mailed to The Will Rogers Theater. It’s from Columbia pictures. It’s titled “Banapple Gas” which was a Cat Stevens song. Anyone know anything about this? Just reaching out. Kinda new to all this.

Thanks, for the reply. It actually came in as a donation from someone that has had it in their possession. It was not mailed here. I looked at the way I worded it. I’m just curious if it has value?

Charles, check out YouTube. Search under “Cat Stevens Banapple Gas 1976 Promo” and read the comments.
A few people did mention seeing it in the theaters.
It was not uncommon for vacant or abandoned theaters to leave some projection equipment and old film behind.
I am speculating that before the wrecking ball arrived at the Will Rogers, this short film left the building and eventually made its way to you. Is it worth anything ? I am guessing you have a 35 mm print. In my opinion, that would limit its potential value.
That being said, I see a lot of unique items on eBay, Amazon and some other venues that do sell. Hope this helps. Good luck.

Roustabout, thank you for the info. Very helpful! I have someone interested but wasn’t sure of a price. It is actual theater film stock(bigger than 35mm). My understanding flammable. It’s in a tin box.

The Will Rogers was demolished in 1990 after being closed for four years. I added a photo that was taken in either 1989 or 1990. Notice the Daley for Mayor bench.

I lived in the neighborhood and remember they had a “Fun Show” for kids on a Tuesday or Wednesday morning in the summer from around 1964 to 1967. They would play a kids movie and cartoons. They also gave away prizes with called out numbers on a pamphlet you were handed as you went in. In an ironic twist, one neighborhood friend, “Bob”, pushed in ahead of another friend, “Ted”, and bewailed that Ted won the big prize, a portable B&W TV!

Balcony was usually closed unless they had a lot of people. They would advertise on the marquee that they had air conditioning to keep cool. Also tried to fight cable TV becoming more widespread with saying “Fight pay TV.”

There was a large mural of Will Rogers in the lobby of the theater. Does anyone know who painted it? I understand that Louis Grell did a lot of interior work for architects Rapp & Rapp and it does look like his work. I asked on the Louis Grell web page but they had no record of it.

There is a photo of that mural on page 1 in the Photos Section that was uploaded in 2011.

There is a much better photo of that mural on page two of the photo section. The one on page 1 is all blurry.