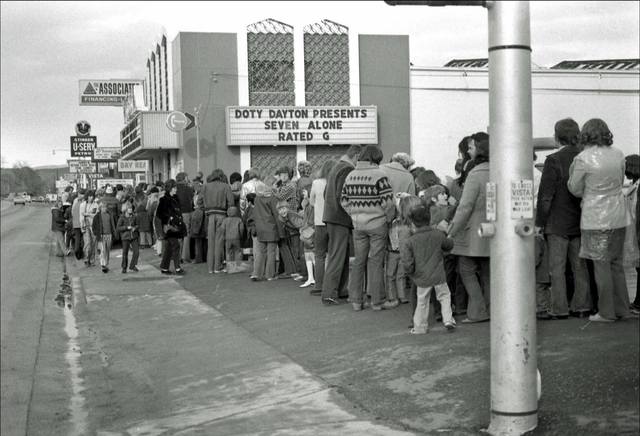 It was Boise’s first movie house to be built away from the downtown area, which already had six theatres, and was located in Vista Village, which the City of Boise calls Idaho’s oldest shopping center.

In a 1973 Idaho Statesman article Matthews said he bid for the big pictures many times to play in his modest-sized 423-seat family-oriented venue. He said he paid $10,000 against ninety percent of the ticket sales for “The Sting”, and “Sounder” ended up costing him $25,000. This was at a time when he was competing against the much larger ABC Intermountain Theatres-owned Ada (Egyptian).

The Vista Theatre finally closed in late-October 1985 with its last film, “Cocoon”. Gary Sorenson, who had owned the theatre since 1979, said the reason was competition from multiplex theatres and its policy of showing mostly family films.

The Vista Theatre building still exists today but is unrecognizable as a theatre for it has been a tire store for many years.

Architect Paul K. Evans should be credited above.

Did Boise have any theatres equipped for 70mm and if so which theatres?