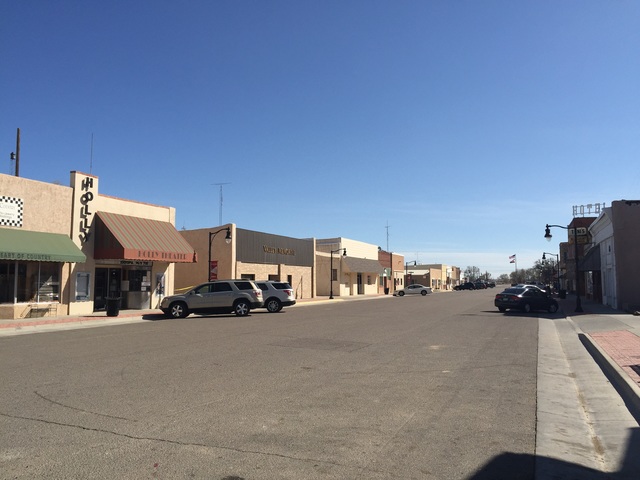 The Isis Theatre was opened in 1923. It was later renamed Sun Theatre. In 1937 it was renamed Pontiac Theatre. In April 1948 it was remodeled and renamed Holly Theatre. The Holly Theatre is is owned by the town of Holly, CO. and is now run entirely by volunteers. Holly, CO, has around 500 residents making it nothing short of amazing that this little theatre still exists. It plays first-run movies every weekend. The townspeople take a lot of pride in their theatre and it shows! The Holly Theatre is a wonderful success story!

Suprisingly, the town of Holly had two movie theatres listed as operating in Film Daily Yearbook;1941 edition. They were the 200 seat Pontiac Theatre and the 250 seat Sun Theatre. Both these theatre were listed in the 1943 edition of F.D.Y. as ‘Closed’.

By the time the 1950 edition of F.D.Y. was published only the 200 seat Pontiac Theatre was operating. This must be the original name of the current Holly Theatre.

New pics of the Holly in the Photo section.

The line from 1923 construction to the Isis to the Sun to the Pontiac to the Holly looks fairly strong. Not sure what happened to the Opera House that became the Star. Anyway, here are a pile of magazine clippings:

Motion Picture News, Dec. 28, 1918: “Fred Adamek of Holly, Colo., has sold his Opera House theatre there to a company of Holly men”.

Variety, Aug. 27?, 1919: “C. Runyan, proprietor of the Star at Holly, Colo., surprised his patrons last week by staging a vaudeville show all by himself after the regular moving picture program had been run off.”

The Film Daily, July 31, 1923, under New Theaters: “Holly, Colo. – Actual building on the new theater to be erected on North Main St. has begun.”

The Film Daily, Oct. 27, 1927: “Holly, Colo. – A petition to the town council protesting against Sunday shows is being fought by E. R. Wood, owner of the theater, through the columns of the local newspapers which he also owns.”

Motion Picture News, Nov. 25, 1927: “The movieless Sunday in Holly, Colo., is now a reality after a long and bitter struggle between R. E. Wood of the Isis theatre and local reformers. The town council passed the ordinance at its second reading last Wednesday night and it became a law.”

Exhibitors Herald, Dec. 24, 1927, reported that a Minusa Cine Screen Company screen had been installed at the “Isis theatre, Holly, Colo.”

Variety, March 24, 1937: “Frank Northrup, who has remodeled an old theatre building in Holly, Colo., will have the reopening about March 25. Northrup also owns a theatre in Syracuse, Kan.”

The Film Daily, May 21, 1937: “Theaters under new names are … the Sun at Holly, Colo., reopened as the Pontiac by Frank Northrup”.

Motion Picture Exhibitor, Aug. 4, 1965: “Two theatres in the state are still closed on account of the June floods – the Lamar, Lamar, Colo., and the Holly, Holly, Colo.” Sept. 15, 1965: “The Holly, Holly, Colo., which suffered a great deal of damage during the June floods that hit Colorado, has been completely renovated and redecorated. New seats and new screen have been installed and it has been reopened by Marvin and Muriel Ellis.”

Filling in the approximate date of the last (?) name change is Boxoffice, April 10, 1948: “HOLLY, COLO. – The Pontiac Theatre has been remodeled and renamed the Holly. Mr. Ellis has redecorated the front and moved the boxoffice to the south side of the entrance.” (So the Exhibitor’s 1953 reference to the Pontiac might have been out of date?)

Boxoffice, Dec. 5, 1960: “Mr. and Mrs. Marvin Ellis have installed an organ in the foyer of their Holly Theatre, Holly, and their son Trent plays selections for the audience prior to the feature presentations”

The Holly Chieftain, Jan. 24, 1948: “It was announced this week that Mr. and Mrs. Marvin Ellis, son-in-law and daughter of Mr. and Mrs. Frank Northrup of Syracuse, Kansas have leased the Pontiac Theatre and will take over its management February 1st. The Northrups who operate a Theatre at Syracuse, have operated the Pontiac Theatre here for the past ten years. Mr. and Mrs. Ellis and small son will make their home in Holly and plan to move here as soon as living quarters are available.”