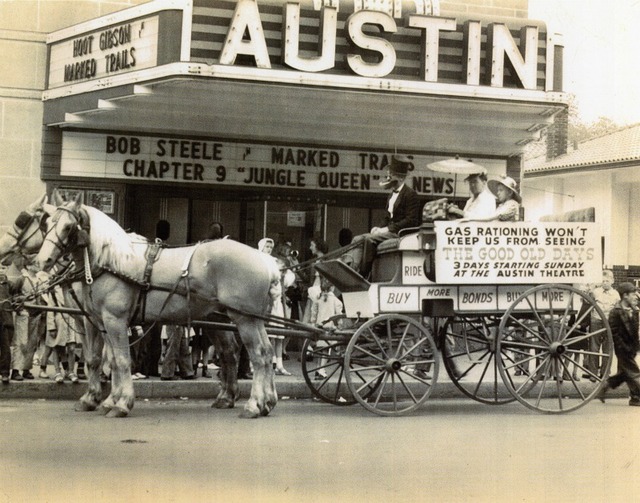 The Austin Theater opened in April 1937 with George O'Brien in “Park Avenue Logger”. It was initially conceived to be named the Time Theater. The architect was Jack Liebenberg of the architectural firm Liebenberg and Kaplan (Seeman Kaplan being the businessman and engineer of the partnership). A good example of a classic Streamlined Deco design, the Time Theater balances and dominates the adjoining shops. Solid geometric shapes make the transition from horizontal marquee to vertical sign appear smooth and effortless.

October 24, 1955- The Austin Theater, after operating 18 years, closed its doors on its final performance Saturday night. The building was purchased from the Minnesota Amusement Co. by Otto and William Baudler, who plan to remodel it in the near future for a store building. W. F. McKallor, who opened the Austin theater as manager in April, 1937, was present at the closing Saturday night for the final checking out. The Austin opened in the early years of modern architecture and was described as “ultramodern, but not modernistic or saucy.” The opening movie, “Park Avenue Logger,” was attended by a capacity house of 506. The closing bill included Abbott and Costello in “Lost In Alaska” and “The Great Sioux Uprising” with Jeff Chandler and Faith Domergue. The movie projector, and other equipment and furnishings, will be removed by the Minnesota Amusement Co. The closing leaves three year-round theaters in the city, Paramount, Sterling and State, and the Outdoor theater.

The building might sort of still be there. 108 has a stone front, but if it was the theater, it’s been pretty badly butchered by remodeling.