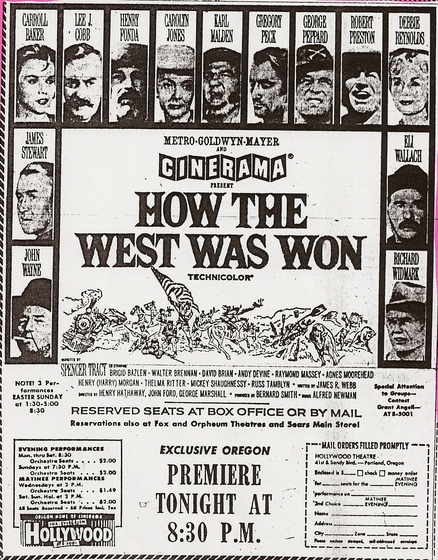 The following is Part 50 in an ongoing, semi-regular series of retrospectives on CINERAMA, the legendary motion picture process that kicked off the widescreen revolution. The series focuses on providing a market-by-market historical record of when and where Cinerama and its multi-panel clones were exhibited. These easy-to-reference articles serve to provide nostalgia to those who experienced the Cinerama presentations when they were new and to honor the movie palaces in which the memorable screenings took place.

THIS IS CINERAMA
Hollywood
November 21, 1961
20 weeks
3-strip / 26fps / 7-track stereo
“At last it’s coming to Portland! The Hollywood Theatre in the Hollywood District of Portland has been completely equipped at a cost of $125,000. The Hollywood Theatre will be the only theatre in the State of Oregon that can or will show CINERAMA Productions!” “[CINERAMA is] the only REALLY NEW wonder of the motion picture world.” “CINERAMA will never be shown in a neighborhood theatre and never on television!”

SEVEN WONDERS OF THE WORLD
Hollywood
April 11, 1962
14 weeks
3-strip / 26fps / 7-track stereo
“YOU are there as you fly to the four corners of the globe including The Congo…Latin America…Middle East…Southeast Asia…and CINERAMA helps you live every wonder-filled moment as you have never lived before!”

HOW THE WEST WAS WON
Hollywood
April 12, 1963
21 weeks
3-strip / 24fps / 7-track stereo
“Exclusive! Only state engagement of this western epic in CINERAMA”

RUSSIAN ADVENTURE
Hollywood
August 24, 1966
4 weeks
70mm / 24fps / 6-track stereo
“This is the ultimate in CINERAMA! This is the last word in truly incredible adventure!”

CUSTER OF THE WEST
Hollywood
January 25, 1968 (Pacific Northwest Premiere)
7 weeks
70mm / 24fps / 6-track stereo
“Now CINERAMA makes it all live again! From the fury and chaos of the Civil War to the glory days of the 7th Cavalry…to the final earth-shaking charge at Little Big Horn!” “Told in all the sweep and spectacle of CINERAMA.”

CINERAMA FILMS NOT SHOWN IN THE PORTLAND MARKET:
HOLIDAY IN SPAIN

TRIVIA / NOTES:
Portland was among a few markets that ran CineMiracle before running Cinerama.

Portland was the first (and only) market in Oregon, the 45th market in the United States, and the 48th market in North America to equip for Cinerama presentations.

References: various issues of Boxoffice, The (Portland) Oregonian, and Variety.

THANKS Michael for starting the “REMEMBERING CINERAMA” series again!

I can’t speak for This is Cinerama re-issue however I did see 2001 Space Odyssey and the screen was noticeably smaller than the 3 strip films. I ask the manager about it and he said it was to reduce picture distortion. To me it did not feel like Cinerama anymore.

70mm Cinerama films did look somewhat distorted on the original deeply curved Cinerama screens; there was an attempt made to deal with this in the printing of the roadshow Cinerama films shot in Ultra Panavision (such as “It’s a Mad, Mad, Mad, Mad World” and “Khartoum”) called rectification which adjusted the degree of image compression across the printed image; this was not done for Cinerama films shot in Super Panavision (such as “2001” and “Ice Station Zebra”), so what the manager told you would appear to be correct as a means of reducing optical distortion, especially if the Hollywood had a deeply curved screen as imagine it probably did. Later Cinerama installs used a shallower curve to help reduce the distortion.

In addition, it has to be remembered that the images on each of the three-strip Cinerama films were six perforations in height (regular 35mm is four perfs high, 70mm roadshow prints are typically five perfs), so all the Cinerama 70mm Cinerama film images were always slightly scaled down from those projected using three projectors.

The “This is Cinerama” re-issue was on 70mm stock, so the image would have been slightly shorter than that which people saw who viewed the original three-strip version. There may also have been some image loss at the extreme edges because it has to be remembered that 70mm prints allocate space left and right of the image for the magnetic sound tracks, whereas the sound for the original three-strip Cinerama showings was on a wholly separate 35mm reel that ran through a special sound reproducer.

Thirty weeks for “Grand Prix”? I am surprised that film did so well in Portland.

At the Palace in Tampa all 70mm films were shown on the Cinerama screen which had been masked down on both sides. I’m not certain exactly how much of the image was lost from 3-strip but I would guess about 10 to 12 feet on either side. When “THIS IS CINERAMA” opened in 70mm I recall the center panel was about the same width as 3-strip, but the two side panels lost nearly half their image within each panel.

This is very interesting content! I’ve thoroughly loved studying your points and feature come to the belief that you are right about many of them. You are superb. albanische lieder 2019

Companion, this site may be fabolous, i simply like it. lawyer in Nigeria

Hi this is somewhat of off topic but I was wondering if blogs use WYSIWYG editors or if you have to manually code with HTML. I’m starting a blog soon but have no coding skills so I wanted to get advice from someone with experience. Any help would be greatly appreciated. ppo insurance

The the next occasion I just read a weblog, I really hope who’s doesnt disappoint me as much as that one. Get real, It was my solution to read, but When i thought youd have something intriguing to mention. All I hear can be a couple of whining about something that you could fix in case you werent too busy seeking attention. Custom Kitchens Vancouver