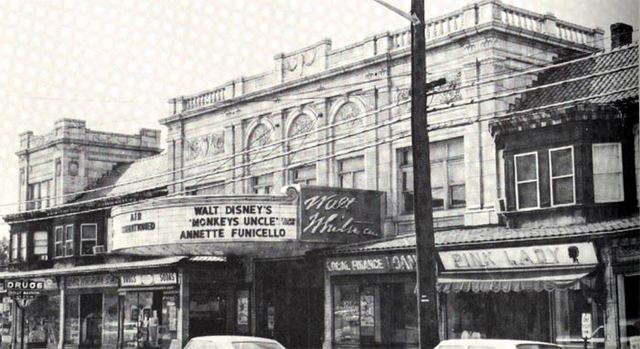 The Walt Whitman Theatre was opened on June 1, 1927. It is often listed as being located in Camden, NJ. Grand old threatre with nice balcony. I saw a few films there in the late-1970’s like “Rocky” and “Saturday Night Fever” when it was operated by the Savar chain. It was last operated by an independent operator who closed it following a small electrical fire in late-1978. The lease, which was due to expire in January 1979, was not renewed. It was demolished in 1981 to create a parking lot and a Walgreens.

Part of the local Savar chain until the mid-‘70s when an independent operator took over and tried mixing live shows with the movies; I remember that Moe Howard of the Three Stooges made an appearance here not long before he died. They also booked Frank Sinatra Jr.; I heard they hardly sold any tickets for that one.

Supposedly the building had structural problems, which provided an excuse for the demolition. Pennsauken wanted to build a new town hall on the site but ultimately decided they couldn’t afford it. There’s a Walgreens there now.

The Walt Whitman Theatre was demolished in 1981. It originally opened in June 1927 and featured marble floors and walnut paneled walls and ceilings. It is always listed as being a theatre in Camden, although its actual location is just across the border in Pennsauken.

It was the first theatre in the Camden area to screen talkies and was a first-run house, being used as a production site for live radio programmes which featured the organ. It retained its stage shows until the 1940’s

A minor electrical fire closed down the Walt Whitman Theatre in late 1978 and the operator at that time didnt re-new his lease which was due to expire in January 1979.

I lived down the street from it… very sad, I grew up in Pennsauke and I know for sure that Pennsauken is not a fan of Historical sites. It’s sad b/c there is alot of history there and they neglect it.

This was my neighborhood theatre growing up in Pennsauken in the 50’s and 60’s. In that era it featured split weeks (Wednesday through Saturday) and then a new film or films, often double features, Sunday through Tuesday. I often went twice a week with the change of fare and saw hundreds of movies, which became the foundation of my film education and lifelong appreciation of film.