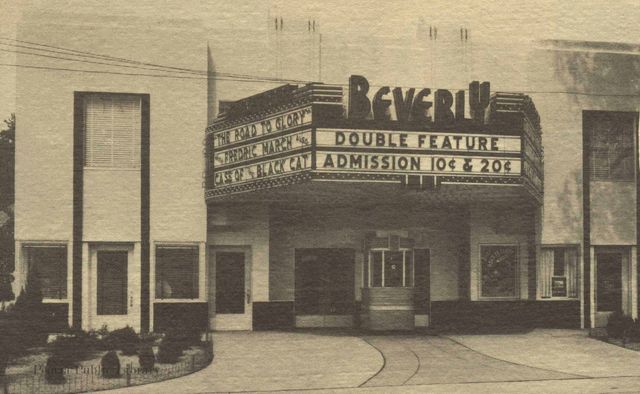 The Beverly Theatre was opened on May 17, 1937 with William Powell in “My Man Godfrey”. It was operated by George Kerasotes, and was located on Knoxville Avenue. The theatre remained in operation until the early-1990’s but has since been demolished and replaced by a Walgreens.

Nice Theatre. i dated a Beverly.

I was in Peoria not too long ago after a very long absence. It was good to be back! I believe the theatre is still there, but is used for some other purpose (?). Those who live in Peoria, please advise.

Whoops: says at the top of the page that a Walgreens is on the site. That’s it.

I was thinking this was on University down by McClure, but maybe I’m wrong. Last movie I saw there was Silence of the Lambs. I remember being a child and my mom taking me to see Disney movies there (Bambi, Freaky Friday, and Snow White come to mind).

Here is an undated interior photo of the Beverly Theatre’s auditorium, from the Peoria Historical Society.

Like Kerasotes' Varsity Theatre of 1939, the Beverly was designed by Peoria architect J. Fletcher Lankton. This web page has a history of Kerasotes Theatres.

A brief item in the April 21, 1971, issue of Bloomington, Illinois' daily paper The Pantagraph noted the death of architect J. Fletcher Lankton and said that he had “….designed Peoria’s Varsity and Beverly theaters as well as numerous other theaters in the Midwest.” So far I’ve been able to identify only one of those numerous other theaters, that being the Esquire in Springfield, Illinois. Kerasotes was a partner in the Esquire, along with Frisina Theatres. As George Kerasotes hired Lankton for two of his own projects, it seems very likely that some of those other theaters he designed were also Kerasotes houses.