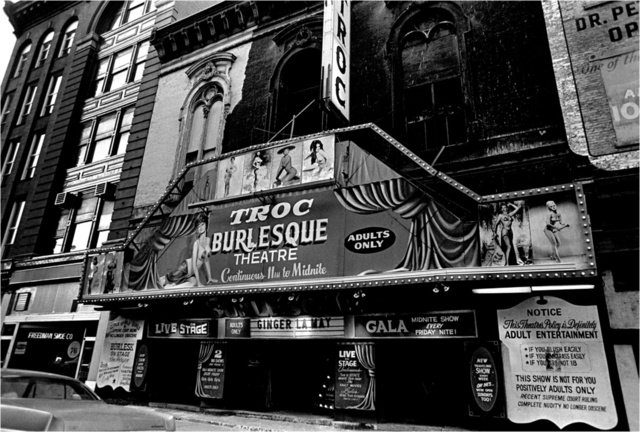 The Arch Street Opera House opened in 1870, and was burned down two years later, but was rebuilt and reopened. It was renamed the Park Theatre in 1879. In 1883, another fire gutted the theatre and it was again rebuilt, reopened a year later as the New Arch Street Opera House. From 1889-1892, the theatre underwent numerous name changes, as well as a handful of remodelings and alterations between the early-1890’s and 1905.

In recent decades, the Trocadero Theatre was a concert venue which also showed movies on Monday nights until July 29, 2019 when the final movie screened was “Pulp Fiction”. The Trocadero Theatre had closed to live shows in May 2019 as the building’s owners had announced the fabled theatre’s long run would come to a close.

When I was stationed in Fort Dix in the early 60’s a bunch of the guys would venture into Philly. Some went to the Troc. My only burleque show during this period was “This Was Burlesque” with Ann Corio that was playing in New York.

My mother worked (as a dancer) at the Troc during the mid 1970’s. I’d be thrilled if anyone had photos from that era. Her stage name was Sunshine and her real name was Diana.
.com

I just found out that my mom’s stage name was actually Sheri DeFore when she worked at the Troc. I’d love to hear from anyone who remembers her.

My grandmother in Jade Green, I was wondering if anyone had any footage of her. my Dad past away and was my only link to my past. My grandfather is Dj Humble Harve whom I also know nothing about. My Dad’s post is above from 2006. If anyone has anything, I’d really appreciate the help.

Recently found these backstage photos of the dancers backstage and a great story pertaining to them: http://www.robertadlerburlesque.com/gallery

The Troc is winding down as a theater, with tonight’s Pulp Fiction being the final Monday movie night. The Troc posted this at Facebook: TONIGHT ✨ Join us for the final Movie Monday at the Troc ~ PULP FICTION (1994)! $3 gets you in & goes toward a drink or snack at the bar. Doors open at 6:30pm, movie plays at 8pm. Arrive before 7pm and get a $3 token for the bar! Dress as a character from the movie and get a $3 token for the bar! Stick around after for trivia & prizes! 21+