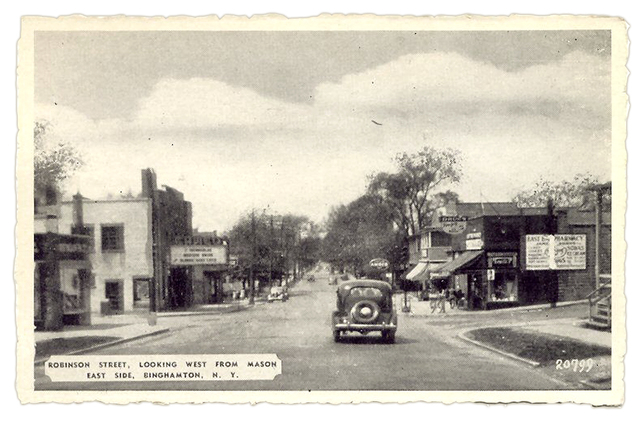 The Cameo Theatre opened April 21, 1928 with “Women’s Wares” and was built to serve the Robinson Street neighborhood. It has a bird cage style box office, inside the lobby. The concession stand and restrooms are located in the rear of the auditorium. The theatre was operated for many years by Ken and Fran Robinson, who were very popular in the community.

In the 1980’s, Carroll’s Development leased the theatre and operated it. Caroll’s merged their operations with Nutmeg Theatres of CT to form CinemaNational. In 1987, that circuit sold to USA Cinemas, which, in 1988, was sold to Loews. Loews operated the theatre until 1993 when they opened the Town Square in nearby Vestal. At that time, they closed their four remaining single-screen operations in the Greater Binghamton area–The Cameo, Crest, Towne Endicott and Cinema Endicott.

The Cameo Theatre reopened under an independent, who installed DTS Sound. After not meeting with much success, the theatre closed. Fran Robinson stepped back in and reopened the house and ran it for a few more years. It closed for the last time in 2002, and has been empty since.

Use this link to see some current photos of the Cameo:

If the link isn’t “clickable” you will need to copy and paste it to see the photos.

Sadly Fran Robinson passed away yesterday 8/6/1011.For those of us who grew up with the Cameo we won’t soon forget her.Eastender

I just read the obituary in this morning’s Press & Sun-Bulletin. I want to express my sympathies to her family on her loss. She was a very nice lady & she, with her husband Kenneth, provided many years of happiness to the Triple Cities movie-going public. After Kenneth passed away, she continued that effort alone for many years. One her many accomplishments, which I complimented her on several times, was her successful bidding on “Star Trek: The Motion Picture” in 1979. As an independent theatre operator, she “beat out” the mighty Cinema National chain (which owned almost every other theatre in the Triple Cities!) for the exclusive right to show the film locally! I had the pleasure of speaking with her a couple of times over the past 3 years. After telling me each time that she didn’t know what she could tell me about the “old days” of the Triple Cities' theatre history, she spent better than half an hour bubbling over with her fond remembrances of her years in the movie business with Kenneth & later carrying on alone. She still went next door into the theatre regularly to be sure “everything was OK”. I also had the pleasure of stopping over to her house this past March to present her with pictures of Binghamton Classic Film’s (of which I am a member) annual display at the Broome County Library which featured several wonderful 8x10 color photos of The Cameo (including one night shot showing the lighted marquee of which Kenneth & she were so proud) & a huge newspaper article about her & The Cameo from 2000. I know her family, as well as many of us in the Triple Cities, will miss her. I hope her theatre will end up being acquired & hopefully reopened someday. Sincerely, Jim Macumber

From the 1930s a photograph of the Cameo in Binghampton.

A chapter devoted to the Cameo Theatre in volume 2 of Jack Edward Shay’s Bygone Binghamton: Remembering People and Places of the Past (Google Books preview– chapter begins on page 35) says that the house opened in April, 1928. Its best-remembered proprietors, Ken and Frances Robinson, took over operation in 1954, and bought the house in 1957.

I was 7 when I had my first visit to the Cameo was to see Star Trek: The Motion Picture in 1979. The next film I saw was Star Trek IV: The Undiscovered Country in 1991. My mother grew up on that side of town and the used to call the place “Kenny’s Cow Palace” in reference to the large barn hall feel.

I remember when “The Shining” played there in the summer of 1980, and “Friday the 13th” was “held over” there for 5 weeks, a record of some kind (“5th & Final Wk!” the Press ad ran). Could someone explain how something was “held over,” etc.? I’ve always wondered about the movie business….

Things were different in the ‘80s as there were not 500+ TV channels, no cell phones, etc., & movie theaters provided the fun. The Cameo had “Fast Times at Ridgemont High,” & would later book movies that really were not that good as movies declined and VHS came out. I drove by The Cameo over the summer & it was all boarded up w/peeling paint and I just wanted to cry as I remembered its marque lights all lit up on summer nights….but now ppl think nothing of driving elsewhere to see a movie or else stay home or watch it on their phones. Technology isn’t always progress…./Glenn