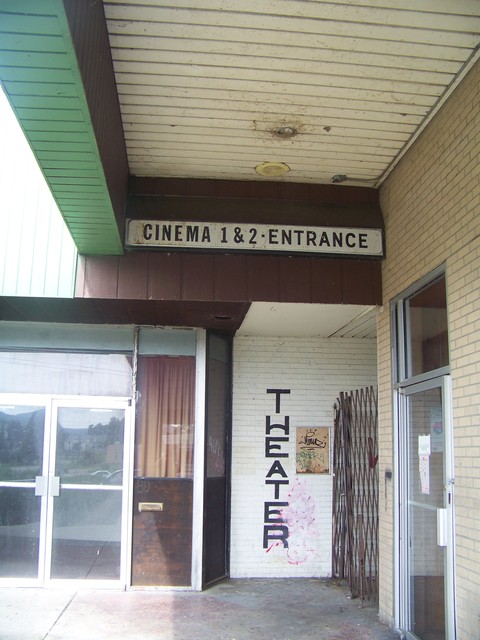 This theater opened in the back half of a former bowling alley. It was built and initially operated by Carroll’s Development Corp. from Syracuse, which later became CinemaNational. That company was bought in 1987 by USA Cinemas, which in turn was bought a year later by Loews.
Both houses seated 305 patrons. The front half of the former bowling alley became (and still is) a pool hall.
Loews opened the Town Square 9 in nearby Vestal in 1993, at which time the Binghamton Plaza 1 & 2 became a second-run house. Loews sold it in 1994 or 1995 to another operator, who ran it as a second-run for a few years. The theater is still there minus all of its equipment.

I know it says that the theater is still there without equipment, are the seats still there, and is there a stage? I was wondering if it is available to rent or lease. Any informatiom would be helpful. Thanks, Anne

As one of the last managers…I may be able to shed light on the name. The owner was also the owner of The Art and The Ritz before the sold them to another person and then moved out of the country. He returned and got The Art back. The Ritz had collapsed so he opened this place. It was in shambles when we first started. It had been derelict for a year and was vandalized. During this time, the prior owner of the former Ritz had salvaged the equipment for the new “$1.50 Cinemas” located in the former Burt’s Department Store building in Endicott, NY. We couldn’t use the $1.50 name since there were a few already in use in NY so we called ourselves the “$1.49 Plaza Theatre” We still charged $1.50 per head and our thing was to give a half dollar coin back in change. I posted a pic I took of the main entrance hall. I was the one who came up with the “Wait A Little…Save A Lot” slogan.

Also, Anne Trebilcock – There was never a stage. It was a flat floor with reclining seats. The place was gutted for parts and still stands empty. The roof has been leaking for years and last visit, I saw that it had started to cave in. With the exception of the pizza place on that end, most of the storefronts connecting to it were falling down.

I went to see THE ODESSA FILE, back in the early 70’s, Interestingly, I was the only patron in the entire Theatre! They stopped the movie about 20 minutes or so into it and the manager asked if I’d come back at some later date!!!

DANG! I was furious!!! I never came back and never saw the rest of that movie till the 1990’s!

This opened on August 20th, 1971. Its grand opening ad can be found in the photo section.

The blond guy who ran this theater did run The Ritz as a 2nd-run show, and he was a meanie! If you came late and stayed to watch the beginning, he grilled you then begrudingly let you stay. The Bing. Plaza always played the horror movies (F13 Pt 2, Omen 2, Carrie, The Howling, etc.), and the midnight movies (Last House on the Left, Alien, etc.). Did anyone go to those, & what was it like? I’m 50 now, lived on the outskirts of Windsor (20 mins away), couldn’t see such R-rated fare, & feel like I missed out terribly! This continues to eat at me all these years later. Good grief! I finally saw “The Hunger” there when I was 17 (kinda EWWW, but at least I saw it). I used to call the theater to hear the recording of what was playing (I used to know the # cold, but have forgotten it), & the guy who left the msg seemed to have fun making them sound ominous. At least then you COULD call and get a msg that listed the showtimes. Now it’s a headache — IF you can find the #! I love your photos. Thank you for this site!/Glenn

The Binghamton Plaza opened theatre-less on August 20, 1964 anchored by W.T. Grants. On August 20, 1971, the theatre launched as part of Carrolls Development Corp. / Carrolls Equities Corp. Circuit and Cinema National. The theatre was an automated twin-screen facility opening as Carrols Cinema Twin 1 & 2 – Binghamton Plaza. The theatre replaced the Manor House Bowling Lanes. The auditoriums had 352 seats each and the mayor was on hand for the ribbon cutting followed by the films, “McCabe & Mrs. Miller” and “The Omega Man.”

USACinemas took over Cinema National operations on November 7, 1986 calling the theatre the Binghamton Plaza 1 & 2. In December of 1989, Loew’s took on the facility. It reduced it to sub-run discount status on May 6, 1994. After a year and a half of discount operation, Loew’s closed the theatre in October of 1995.

A year later, it re-emerged as the $1.49 Binghamton Plaza Theaters relaunching on December 6, 1996 with “Last Man Standing” and “Long Kiss Goodnight.” Operating in its final months as the Binghamton Plaza Theatre, the facility closed on October 28, 2001 showing “Shrek,” “Princess Diaries” and “Jeepers Creepers” on Screen 1 and “American Pie 2” and “Rush Hour 2” on Screen 2. It had fulfilled its 30-year lease.