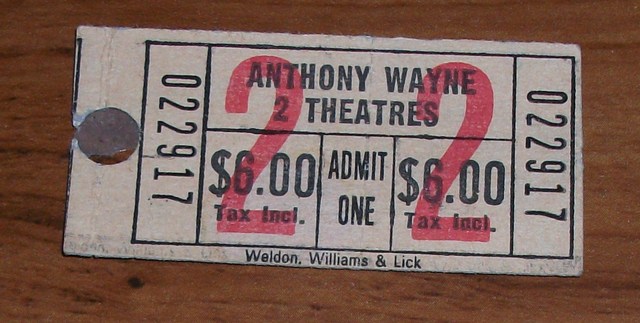 Located in the Philadelphia suburb of Wayne in Delaware County. The theatre was named after Anthon Wayne, who was a general during the American Revolution. The Anthony Wayne Theatre opened June 20, 1928 with the Warner Bros. Vitaphone feature film “Old San Francisco” starring Dolores Costello which was presented with its Vitaphone Symphony Orchestra music track, plus two Vitaphone shorts. The pipe organ (make unknown) was opened by organist Otto F. Beck. The theatre was built and operated by local theatre owner Harry Fried who had previously operated a theatre on North Wayne Avenue in a converted 1880’s house. Because the theatre was on the edge of the suburbs, the opening of such a grand movie palace was then locally referred to as ‘Fried’s Folly’. Architect William Harold Lee chose colorful terra cotta details manufactured by the Conkling-Armstrong Terra Cotta Company, Philadelphia. A sketch of what the façade the the theatre was planned to look like was signed by Louis Kahn, then working for Lee, but later became an internationally renown architect.

Upon the theatre’s opening, a mirrored entrance led to a spacious foyer. On each side of the foyer was an artificial fountain, in green tile. There was a goldfish pond in a lobby alcove, which was decorated by a tile mosaic. The auditorium opened with 1,600 seats, all on one main floor and had fake windows on the side-walls. If you have or know of a photo of the original interior, especially the auditorium, please make a comment below.

From 1940 until 1972, the Anthony Wayne was operated by the Philadelphia movie operator William Goldman. In 1965, the original marquee was removed and several original exterior terra cotta ornamentations were also taken off. The theatre since has had a beautiful wrap-around, curved marquee.

In 1972, Budco, another Philadelphia movie theatre operator, took over, as Goldman sold all his theatres. In 1982 or 1983, the auditorium was divided in two. Original décor in the auditorium was no longer visible. By the mid-1990’s, each auditorium had about 370 seats configured by 23 or 24 rows of 15 or 16 seats. The movie screens were decently sized, about 25 to 30 feet wide.

In 1987, Budco sold its theatres to AMC, which then operated the theatre until September 1997. By the end of the 1990’s, false walls and lowered ceilings characterized the lobbies. In 1995, Friends of the Anthony Wayne Theatre organized to save the theatre when local residents learned the building was for sale.

In 1997, local entrepreneur Stephen W. Bajus purchased the building with intent to keep it operating as a first run movie theatre. When AMC vacated shortly thereafter, Bajus actively recruited several operators, and considered himself fortunate to find interest by Clearview Cinemas. Bajus' company began much needed renovations and extensive restoration to the facade, roof and all external portions of the building. Once Clearview had signed to a long term lease, extensive interior renovations were performed jointly by Bajus & Clearview. Much of the plaster ornamentation adorning the lobby and concession foyer walls was uncovered and restored. Some plaster originally on the left wall of the auditorium when built is now visible in the hall that leads to the two new auditoriums that were created from the previously twinned auditoriums (from their lengths nearest the original stage). Another screen was placed in the former stage house, and portions of the original proscenium arch were exposed in the hall in front of that new auditorium. The now five auditoriums had a total of about 750 seats when opened. As of 2015, auditoriums 1 (left of the concession stand) and 2 (right of the concession stand have 141 and 162 seats respectively. Auditoriums 3 & 4 had 121 and 172 seats. Auditorium 5 in the ex-stage house has 114 seats. The projection booth for the twinned auditoriums was greatly expanded, following the paths of the halls. The original 1928 projection booth remains upstairs. Clearview Cinemas began a 30 year lease on July 2, 1998. The theatre reopened in December 1998.

In April, 2007, the theatre was briefly closed for new auditorium seating, new carpets, and other spiffying up. Mainstream films have long been the primary fare of the Anthony Wayne Theatre. In June 2013, Bow-Tie Cinemas took over, and changed the black background of the marquee to the white background it had previously had before Clearview’s renovations. On August 9, 2013, Bow-Tie Cinema relinquished this theatre and the only other Pennsylvania theatre that it and Clearview had operated, the Bala Theatre, to Reel Cinemas PA, the company run by Greg Wax that operates the Narbeth Theatre. As of 2015, sample lounge, recliner chairs are in the foyer, portending a possible future change. The locally beloved movie palace closed on March 16, 2020 due to the Covid-19 pandemic shutdown. As of 2022, the Anthony Wayne Theatre is no longer listed on the website of Reel Cinemas, PA, so its continuance for movies may be in jeopardy.

This is a truly wretched theater and a disgrace for the Clearview Cinemas chain.

There are five theaters: two are carved out of the former main audiotorium; the other three are in the basement.

We attened a matinee screening of “Tooth Fairy” in one of of the two upstairs boxes. Here’s a summary of the horror show:

If Craig O'Connor is still an exec with Clearview, I would strongly recommended you make a visit to this theater (there is an amtrak stop one block away) and ask yourself one simple question: How would you feel if you spent $24 for three tickets and were treated to one of the most technically inept movie presentations I have seen in years? The truly sad thing: This theater, in the heart of a wealthy neighborhood on the main line, could be a charming, retro alternative to the sterile AMC/Regal boxes. Please, someone, step up and make this theater a destination once again.

William Lee was the architect for the original Anthony Wayne Theatre as well as many other movie palaces of the early days of cinema. I was the architect for Budco Theatres when this theatre was twinned. This was not a glory project. When Clearview took over the operation, I was offered the opportunity to create multiple screens in this facility in order to make it a viable commercial enterprise. The solution resulted in a five screen facility, none of which are in the basement. With full approval from Clearview, the finest craftsmen available were hired to restore the original detail in the entrance and lobby although much of the detail from the original auditorium was lost. Mitchel Abramowitz, FARA

does anyone know who the actual builders were that installed the terra cotta facade?

My Introduction states who manufactured the terra cotta. Don’t know if manufacturer installed it. Here’s a clip from YouTube that shows some an ornate plaster detail in entry or lobby:http://www.youtube.com/watch?v=C9p445v91Nk

Mr. Abramowitz: welcome to the site! I had heard about your work on many of our area’s theaters. Was the auditorium’s original decor gutted when creating the 5 auditoriums? Was it all lost or some hidden? I’ve not seen a photo of the auditorium before it was twinned. Did you do the twinning, too? Do you have photos or can describe the original auditorium?

This theater — and the Bala in Bala Cynwyd — are NOT part of the Bow Tie Cinemas chain. They are now part of “Reel Cinemas.” Anyone know when or why this happened? Does anyone know anything about Reel Cinemas?

I already amended my Intro above.

My father, Willette Mixon, was the manager there with Goldman, Budco, and all us kids worked there at the time or another. I will have to dig up some old pictures and share them.

The Manager of this theater is incredible! Keep up the good work Newt !!!