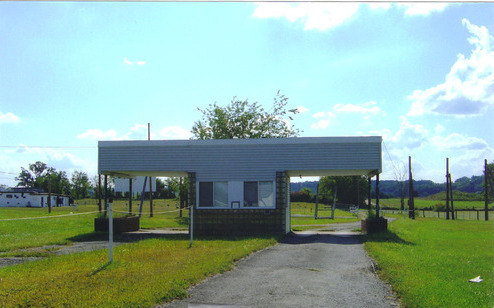 In October 2021 the married couple who operated the Skyview Drive-In died within a week of each other due to Covid-19 and the drive-in is closed until further notice.

Thanks Ken and Mike.

The street view above is wrong. Photo needs to be about a mile to the south. Grew up about two miles from there. Wonderful place to watch a movie.

Per their website, address for this drive-in is 577 Pennsylvania 88.

Cinemette as a theater chain did not start until the 1970s. Before that, the area had Associated Theaters, owned by the Stern family, and Stanley-Warner Theaters. I don’t know which one this drive-in belonged to, or if it was an independent.

Every anecdotal source says this drive-in opened in 1946, but they’re all wrong. The Jan. 25 1951 Evening Standard of nearby Unionville wrote about a lawsuit against the drive-in’s owners that “when the theater was opened in 1948, reddog and earth was heaped up near the headwaters of a brook”. Which explains what the Theatre Catalog wrote.

The 1948-49 Theatre Catalog listed Carmichaels Drive-In as under construction, Exec: Lou Stuler, Stuler and Coe. Carmichaels was in the regular drive-in list in the 1949-50 edition. By the 1952 edition of the Catalog, its name had changed to the Skyview, still owned by L. Stuler and Duard Coe.

In the newspapers in nearby Unionville, its first mention was in a February 1950 traffic accident report as “the Drive-In theater”. It was advertising in those papers by summer, calling itself the Sky View with a small gap between words. By the 1960s, the ads were running as the Sky-View with a hyphen.

In 1960, the Brownsville Telegraph mentioned that “Lewis Stuler and Durwood Coe” owned the “Skyview”.

The Pittsburgh Press ran an obituary for Louis S. Stuler after he died of a heart attack at the age of 47 on August 10, 1961. “Together with Duard Coe of Waynesburg, Mr. Stuler owned and operated the Sky View and Brownsville Drive-In Theaters”.

The 1952-66 Motion Picture Almanacs listed the Skyview Auto (later just the Skyview) as owned by Stuler & Coe. Capacity was originally 225, but doubled to 450 by 1963. When ownership info returned for the 1978-82 editions, capacity was 400 and the owner was Cinemette Corporation of America, based in Pittsburgh. In the 1984-88 editions, the owner changed to G & G Theaters, Inc., which incorporated in 1963 and is now inactive.

“CARMICHAELS, PA. – The drive-in on Route 88, which will be opened within a few days, is unique in its screen tower construction. Cemenstone Corp., Neville Island, is producing the 53x50 screen tower in blocks poured at Neville Island and fabricated here. These blocks are 22 and 28 feet long, 6 feet wide and 4 inches thich. The tower itself is supported by four concrete posts, the weight being over 90 tons for the 45x33 screen. Louis Stuler and Durward Coe are owners of the drive-in.” —BoxOffice, July 17, 1948

The married owners died of COVID-19 in October 2021 a week apart. The drive-in is closed until further notice. I doubt it reopens.

Following up StrangeStephen’s note, the Observer-Reporter of Greene County PA published an article on Dec 9, 2021 about the Skyview and its late owners. Elizabeth Clara Lysiane Walker, 57, died of Covid on Oct. 11. Her husband, Charles Walker III, 58, died of Covid 10 days later in the same hospital. They had owned the drive-in since 2007.

Caleb Miller, one of the Walkers' sons, told the newspaper, “We’re going to open it up next season if we can. If we can run it, we’re going to.”

I don’t want to be glib in the face of such a tragedy, but how can you tell when a seasonal drive-in is permanently closed? It’s not when it closes, it’s when it doesn’t reopen the following spring. As an optimist, I continue to consider the Skyview open.