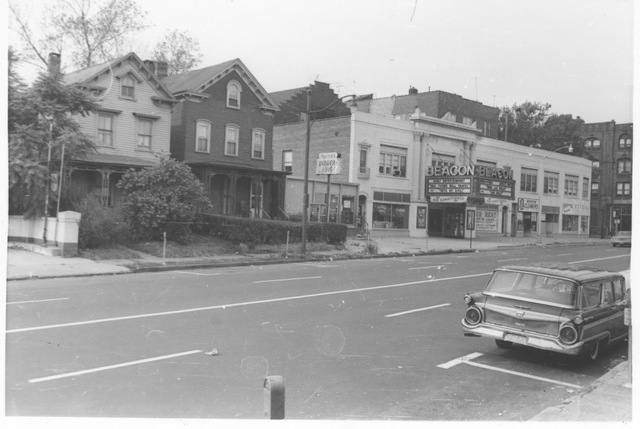 The Strand Theater was opened by 1925. By 1936 it was operated by Kenroe Theaters Inc. It was later renamed Beacon Theater and was owned/managed by the Kridel family who also operated the Palace Theater, Orange Theater and the Pix Newsreel Theater, Orange as well as the Troy Hills Drive-In. It had an enormous wrap-around marquee and as I remember was one of the most spotlessly clean theaters I have ever seen.

There is a 1934 city directory on ancestry.com listed as Newark but covers The Oranges also. P 284 covers Main St in East Orange starting from the Newark Line and 129 Main St near Grove St is listed as “The Strand” Theater. So that would mean the theater wasn’t always The Beacon. I lived a few blocks from there in the 1950’s and am hoping to get more info and hopefully photos from a Kridel descendant we’ve located.

1964 photo of The Beacon from the Berg Collection courtesy of the Newark Public Library: http://stocktonschool.blogspot.com/2012/07/south-side-of-main-st-between-steuben.html

There was also a movie theater called The Regent at 88 Main St, East Orange from 1915 to 1925 (The Strand, later called The Beacon, opened in 1925). Here is a photo and info about The Regent: http://stocktonschool.blogspot.com/2012/07/the-regent-movie-theater.html

Blog post about The Beacon along with October,1964 photos:

A 1928 publication called The Film Daily is online at http://www.archive.org/stream/filmdaily4344newy/filmdaily4344newy_djvu.txt. In that document it lists changes of theater ownership and closings. At April 6, 1928 it writes under closings “East Orange —Brighton; Lyceum and Oxford.” So it looks like a theater named the “Brighton” closed and it also looks like the “Oxford” (which may have been in the Lyceum of the Masonic Temple) also closed.

This item from the February 18, 1922, issue of The American Contractor sounds like it could be about the Beacon Theatre: