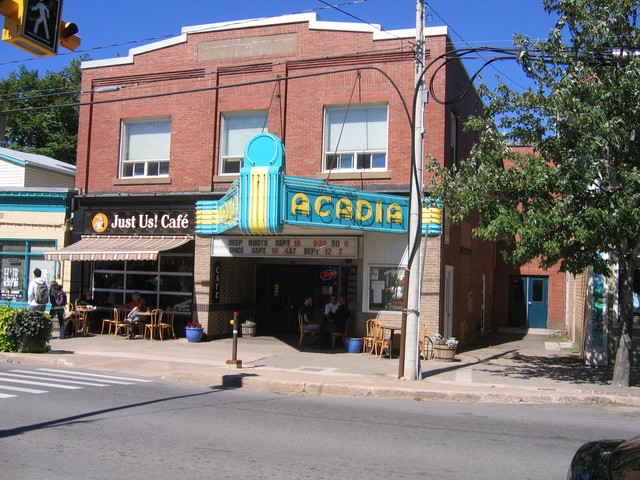 The Acadia Theatre is on the same side of the street as Paddy’s in the middle of downtown Wolfville on Main Street. It’s an historic landmark dating back to 1899, when it opened as a vaudeville theatre known as the Opera House. In 1924, it became known as the Orpheum Theatre. In the fall of 1947, the re-named Acadia Theatre showed its first film.

The newly renovated theatre was reopened in November 2004 with a beautifully restored neon marquee that says ‘Acadia’, the cinema is home to the Fundy Film Society. The building is called the Acadia Cinema, but the theatre has been named after long-time manager, Al Whittle. Al ran the theatre (and ripped the tickets, chose the movies, made the popcorn, ran the projector) from 1953 to 2000. There is a cafe in the front of the building.

Fascinating video about Al Whittle, founder of this theatre: https://vimeo.com/66330686

FROM THE THEATRE"S WEBSITE, A HISTORY OF THIS PLACE:

WHO’S AL? We’re glad you asked! Not surprisingly, the Al Whittle Theatre was named after Al Whittle. From 1953-2000, when our venue was known as the Acadia Cinema, Al was the manager. He ripped the tickets. He made the popcorn. He chose the movies. He was a projectionist. In short, he did a lot of things.

A native of Port Elgin, N.B., A. Ellsworth (Al) Whittle began working in movie theatres at the age of 19. He came to Wolville by way of Amherst, Charlottetown and Truro when Gerald Spencer’s Ononette Investments hired him. After a brief stint in Middleton, Al returned to Wolfville (1953) to take a permanent position as the youngest theatre manager in Canada.

Although Al has retired from his managerial position, he is still very busy in and around Wolfville. Among other things, Al serves on the board of directors for the Acadia Cinema Cooperative, the volunteer-run organization which owns and operates the Al Whittle Theatre. He is a founding member of the Fundy Film Society, and an honourary board member. And he still makes the best (and most secret) popcorn in town.