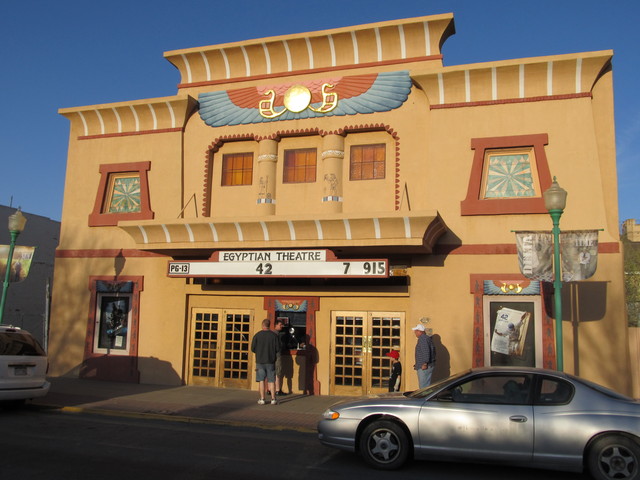 The 750-seat Egyptian Theatre opened on Main Street on October 1, 1928, designed by architect Montana S. Fallis of Denver, who also designed the Mayan Theatre in Denver. Like the Mayan Theatre, Fallis used a then-popular revival style of another ancient culture, this time Egyptian, in this theatre’s decor. In the 1940’s it was operated by Fox Intermountain Theatres Inc. and they closed it in April 1959.

The Egyptian Theatre was beautifully restored to its original appearance in 1996 and continues to show movies today.

The theatre was added to the National Register of Historic Places in 1993.

Encylopedia of the American Theatre Organ, Volume 2 indicates that a Robert-Morton organ was installed in the Egyptian (Rialto) Theatre in 1928.
Film Daily Year Books for 1931, 1946, and 1949 indicate that the theatre was operated by Fox Theatre subsidiaries.

I’ve read this theatre is where the hugely successful Depression-era promotion “Bank Night” was first created by promoter Charles Yaeger.

The 2005 link is gone (the one to photographs), but this link to Wikipedia shas two nice interior shots, both lobby and auditorium. Can’t find an official web page for the theatre though. Also says the digital conversion was in 2009.

From the April 23, 1959 issue of Motion Picture Daily: “Fox Intermountain Theatres has closed the Egyptian Theatre, Delta, Colo., and is using the idle marquee to advertise the fact that the property is for sale.”

Boxoffice, Sept. 26, 1960: “DELTA, COLO. – The Egyptian Theatre has been reopened under new ownership after being closed nearly two years. The theatre, which has been renovated, is being operated by Tom Hardy”

The Egyptian Theater was opened in Delta in 1928. The original stage curtains were said to be beautiful with vibrant colors and a number of ancient Egyptian-style figures, each one unique.

After hanging in the theater for many years, the curtains disappeared into history. We assume they were discarded after more than two decades of use. The last photograph the Delta County Museum has is from 1950 and it is in black and white. If anyone has a color photograph of the curtains, or knows definitively what became of them, please let us know, and we will pass that information on to the Delta Museum.

After its initial heyday, the Egyptian Theater fell into decline, but was renovated in the 1990s to reflect its former glory."