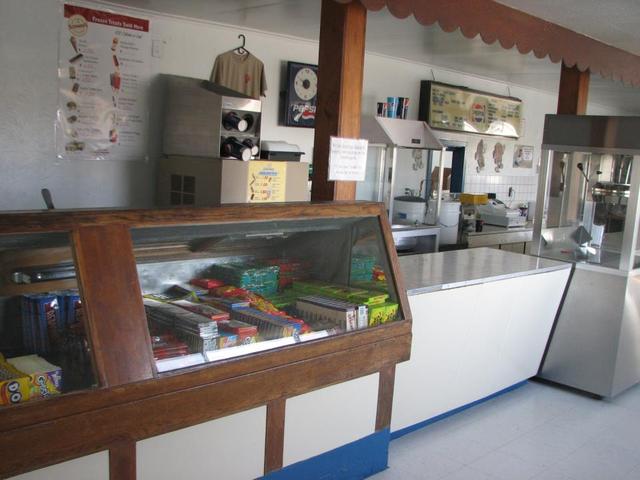 This single screen ozoner opened on March 11, 1955 with Randolph Scott in “Canadian Pacific” & Bud Abbott & Lou Costello in “The Naughty Nineties”. It had a capacity of 400 cars. It is open seasonally from May through September. It runs double features. It is located on Highway 92 just on the outskirts of town.

The Big Sky was (is) on Crawford Ave, one street over. It was closed during the 80’s when Exxon pulled out in the mid-80’s and the local economy collapsed.

Now there is commercial development next door (WalMart, Safeway) and the property will never be good for a drive in again because of the light pollution.

Uploaded some pictures from there FB page.

couldn’t they move the drive-in screen to the tru-vu drive-in and twin it?

It must have meant the Tru-Vu, which is the closest name. The 1955-56 Theatre Catalog listed the Tru-Vu’s owner as S. H. Dixon.

With their projection booth on top, they ought to twin this theater.

A short note from the Aug. 1, 1960 issue of BoxOffice: “The Tru-Vu Drive-In, Delta, was destroyed by fire and is closed.”

Grouped together, these stories from The Daily Sentinel of Grand Junction CO read like a novel.

Jan. 6, 1958: “Vandals wrought about $1,000 damage to the exterior of the Tru-Vu drive-in theatre, which is closed for the winter. … The marquee was torn up and all glass except in three windows was broken.”

Sept. 8, 1958: “Vandals (ripped out 14 speakers,) and 72 wires connecting speakers with the main system were found missing”.

Oct. 14, 1958: Twenty-six speakers and connecting wires were missing Sunday when Fred Chubka, owner, went to the theatre and noticed the vandalism.

July 21, 1960: “A blazing fire gutted the Tru-Vue Drive-In theatre building … causing about $7,000 in damages. The blaze apparently was set, according to Fire Chief Harvey Richards.”

(That trial ended in a hung jury. The case was rescheduled for early 1962. After delays, on May 14, the date the second trial was to begin, the two parties reached an out-of-court settlement.)

May 28, 1963: “The two drive-in theaters at Delta, the Skylite and Tru-Vu, were burglarized early this morning … (a few items) were found missing at the Skylite theater. Nothing was taken from the unused Tru-Vu Theater. The break-ins were discovered this morning by the owner, Fred Chubka.”

Sept. 12, 1963: “The Tru-Vue Drive-In Theater was reopened Wednesday night (Sept. 11) under the new ownership of Police Chief Dan Morgan and James Hanson, both of Delta. The theater … was sold through the district court to expedite property settlement in a divorce case”.

Stanley and Jeanne Dewsnup bought two other Delta theaters in 1966, according to a Sept. 21, 2013 article in The Daily Sentinel of Grand Junction. An earlier Daily Sentinel story added, “A year later came the acquisition of the Tru-Vu,” which would make the year of their purchase 1967.

According to an article in the Sept. 22, 1996 edition of the Rocky Mountain News, the Tru-Vu “opened on Friday, March 11, 1955, with Randolph Scott in Canadian Pacific and Abbott and Costello in The Naughty Nineties.”

Adding detail to the reported 1960 fire, 1996-owner Jeannie Dewsnup told the News that she had heard that a then-juvenile related to “the owner of the Big Sky once piled bales of hay in the projection room of the Tru Vu, and set them afire. When they (the Dewsnups) purchased the Tru Vu in 1967, the walls of the projection room were still black – lending credence to at least part of the story.”