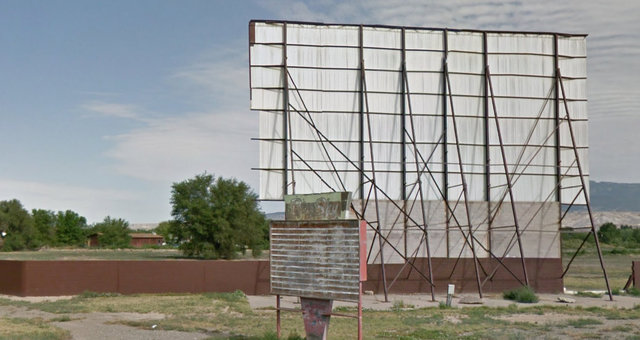 The Skylite Drive-In was opened on May 10, 1949. It was one road down from the Tru-Vu Drive-In. In 1955 it was operated by William Taggert. It was renamed Big Sky Drive-In in March 1964. It was closed in the mid-1980’s after Exxon left town and caused an economic collapse.

It is (and was) owned as well as operated by Stan and Jeanne Dewsnup who also have the Egyptian Theatre and the Tru-Vu Drive-In. Jeanne still owns and operates both of the aforementioned as well as the dark Big Sky Drive-In.

She had hoped to reopen the Big Sky Drive-In for years but the land around it eventually developed enough (including a Walmart) that she gave up hope because of all the light pollution the screen would now suffer. The existing screen was built after the old one blew down in the late-1970’s and was covered by the insurance.

The snackbar/booth building was demolished sometime in (I believe) the last decade after vandals had finally destroyed it to the point of being a hopeless liability. The screen and marquee still stand and the property is still as it was in its drive-in days.

right next to the drive-in they built a wal-mart they didn’t build the wal-mart on the actual drive-in because the drive-in gods really like this particular drive-in for some reason.

A Nov. 12, 1949 note in BoxOffice mentioned Max Storey as “owner of a drive-in in Delta, Colo.” Must have been the Skylite.

The Skylite opened on Tuesday, May 10, 1949, according to a very brief note the next day in The Daily Sentinel of Grand Junction.

According to a couple of stories in the mid-1950s, only part of the Skylite was within the Delta city limits. Bill Taggert repeatedly asked the city council to hook into the local electrical grid; the drive-in started with service from the Delta-Montrose Rural Power Lines Association.

The Daily Sentinel wrote on Nov. 15, 1961, that Fred and June Chubka had sued William and Helen Taggert over “a destructive fire which closed the Tru-Vue Drive-In Theater in July of 1960. They also allege fraudulent acquisition of an interest in the theater.”

The long story of the Taggerts reaching an out-of-court settlement in 1962 with the former Tru-Vu owners is available in that drive-in’s listing on CT. Subsequent newspaper stories imply that’s about the time the Taggerts ceased to own the Skylite.

The name change occurred in March 1964 along with another ownership change, as reported in the March 30, 1964 edition of The Daily Sentinel of Grand Junction. “DELTA – The newly remodeled Big Sky Drive-In Theater on Crawford avenue east of here was opened this week under new management. Formerly known as the Skylite theater, the outdoor movie was purchased by Tom Hardy, manager of the Egyptian Theater here, from Edgar Jones of Vernal, Utah. Hardy will continue management of both units.”

Not so long after Hardy bought the Big Sky, both the drive-in and the indoor Egyptian were purchased by Stanley and Jeanne Dewsnup “in the late ‘60s after the former owner was killed in a plane crash,” according to an April 14, 2000 story in The Daily Sentinel of Grand Junction. “A year later came the acquisition of the Tru-Vu. The oil shale bust forced the sale of the Big Sky in 1986.”

An Aug. 26, 2018 story in the Daily Sentinel said the couple acquired the first two theaters after seeing an ad in BoxOffice. The Dewsnups “kept them running for years, showing Spanish-language films at the Big Sky.” After the oil shale bust of the 1980s, they decided to close one and preferred the Tru-Vu for its lack of light pollution. Stan passed away in 2008, and Jeanne died April 9, 2019.

Someone should reopen it. With todays super bright projection lamps, light pollution should not be a problem.

There was a weird little article in the Sept. 12, 2003 issue of Steamboat Today (Steamboat Springs CO) that mostly listed “Colorado drive-in theatres within mud season driving distance”. We know it’s not 100% accurate because it included the Sunset of Canon City, and we have a 1999 aerial to prove that it was gone by then. But its note for the Big Sky in Delta added:

That really was a 2003 movie, so Steamboat Today didn’t pick up an old listing. Why did its writer believe the Big Sky was open and showing that movie twice per night?

Boxoffice, April 2, 1949: “Harry Baird, Max Story and E. C. Jones are building a 400-car drive-in at Delta, Colo., leaving room to expand if needed. The spot will open about May 7, and will use Motiograph sound and booth equipment and Service Supply car speakers, all bought from Ted Knox.”

It appears that the Skylite (built by the Sky Light Amusement Co.) didn’t run any grand opening ad in the local Delta County Independent newspaper. Its first ad was May 12, 1949, touting the May 13-14 double feature of “The Adventures of Gallant Bess” and “Gas House Kids Go West”. The ad concluded “Watch for your weekly program through the mail”.