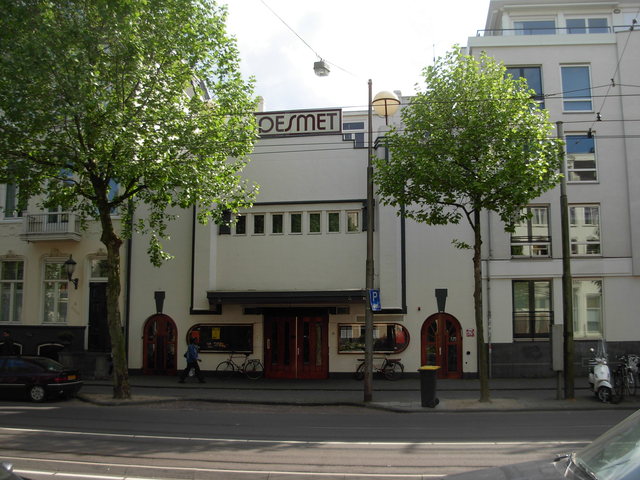 The Filmtheater Desmet was opened in 1926 on the site of an earlier theatre. The architect was J.F. Staal with a stunning interior designed by J. Boterenbrood which has laquered wood panels on the walls and elaborate light fittings.

It was built as a live theatre and was named the Rika Hopper Theatre after the famous Dutch actress of the 1920’s. It became the No 1 theatre in Amsterdam for staging revues, cabaret and small musical comedy and operetta productions.

During the German occupation it went through several name changes and being located in what was then a predominently Jewish area (Jews were forbidden to attend places of entertainment) it eventually closed on 3rd March 1944. It re-opened as the Hortus Theater (due to its close proximity to the Horticultural Gardens), but this was short lived and it closed again on 4th September 1946.

Three weeks later it re-opened as the Desmet Cinema, named after Jean Desmet the famous Dutch film pioneer and exhibitor. The opening programme was on 25th September 1946 with the British film “The Night Has A Thousand Eyes” starring James Mason.

From February to June 1980, the Desmet was closed for improvements which included renovation of the main auditorium and a new facade and foyer designed by Viaming Jef Groote.

It operated as one of the most popular off-circuit cinemas in Amsterdam until closing in 1997. The building is now known as Desmet Studio, in use as a soundstudio, with a music stage for concerts and a cafe.

here’s my May 2008 photo, but that 1st photo that I linked above, without the leaves from the trees, is better:
View link