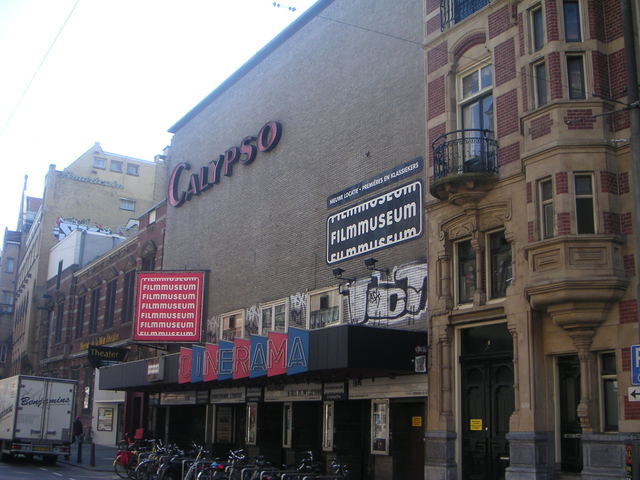 The opening film at the Calypso Cinema was the British made movie “The Deep Blue Sea” starring Vivian Leigh and Kenneth More. It opened on 22nd December 1955 and the architect H. van Vreewijk created a sleek modern 1950’s styled cinema that had 414 seats in the orchestra and 188 in the balcony.

The walls in the auditorium were bare apart from two relief scuptures flanking the proscenium. On the right was depicted Odysseus and on the left, the nymph Claypso. These were designed by John Grosman. Indirect lighting lit the auditorium from troughs along the side walls.

In the summer of 1965, modernisation was carried out that merged the Calypso with the adjacent Bellevue Cinerama in the foyer area and the unit was re-named Cinerama and Calypso, using a shared foyer.

Space became available where a new small screen cinema was installed and this opened on 25th December 1965 as Calypso Club. The main auditorium of the Calypso was twinned in 1979 and together with the Calypso Club became known as Calypso 1-2-3 , but from 7th February 1985, Calypso 3 was re-named Cinerama 2!

From December 2002, programming at the Calypso Cinema was provided by the Nederlands Filmmuseum Stichting (Amsterdam) which put it into more of an art house situation while the Bellevue Cinerama operated next door as a single screen operation screening 1st run movies.

Both cinemas were closed in November 2006 and have now been demolished. On the site of the former Clypso Cinema and Bellevue Cinerama, a new building has been erected for the DeLaMar Theatre, a theatre for live shows. In addition to utilising the vacant lot, the new building reused the facade of the houses and apartments to the left of where the Calypso Cinema and Bellevue Cinerama had previously stood.

An exterior photograph of the combined facade of the Calypso Cinema and Bellevue Cinerama Theatre in October 2005:
http://www.flickr.com/photos/howardbhaas/59288200/

What became of the illuminated Cinerama logo which was situated at the front of the marquee? It survived until the end, long after Cinerama presentations ceased. I liked this theatre, it is where I saw India Jones, ‘Raiders of the Lost Ark’ for the first time.