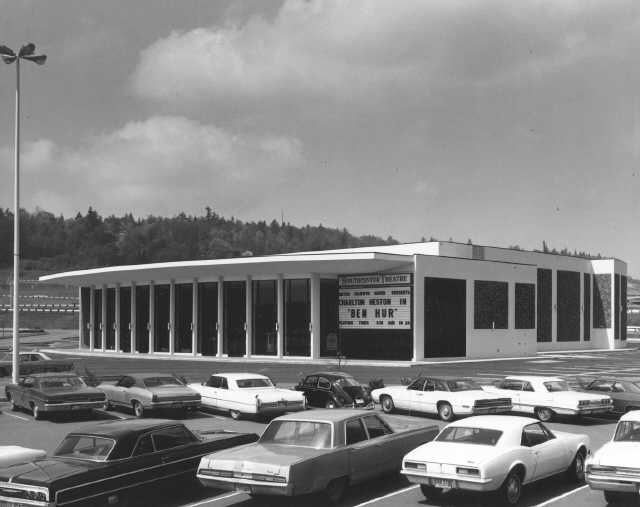 The Southcenter Theatre was the last 70-mm Cinerama-capable theater built in North America. It opened in 1970 by United Theaters and had seats for 1,228 patrons. It boasted one of the largest screens in the area; the deeply curved screen measured 88 feet wide and 32 feet high. It closed August 5, 2001, after a showing of “Moulin Rouge”. The building was demolished in 2002 to make way for a Bahama Breeze restaurant.

It was a great theatre because you felt like you could walk right into the screen. It was that classic, giant, one-auditorium-style theatre. That’s probably why it didn’t survive in a multiplex era.

I think it was a revival.

Another thing I remember about this auditorium was the small curtains that covered the projection booth window during intermissions. You can see them in the color photo Lost Memory posted. You always knew the film was about to start when the booth curtian opened first! I’ve never seen that in any other theater. Was Very classy!

I ran that theatre with a man named Jeff Parsons for a few years, was a great place to work and a great job.

I drove by and saw the Restaurant there, great memories.

Ben-Hur was reissued in 1970 & played several theaters in the Seattle area. I drove the vehicle that shuttled the 70mm Ben-Hur reels from the Cinerama, to Southcenter, then to Tacoma Mall. Only one 70mm print was being used and all the others were 35mm. The 70mm originally went to the Duwamish Drive-In?!?!?! (part of the United/Sterling/Danz chain) but was quickly swapped for the Cinerama’s 35mm print. Southcenter/Tacoma Mall never marketed “Cinerama” but Southcenter did show the same print of 2001 as the Cinerama showed; I’m the guy who went & picked it up & drove it to Southcenter. The word “Cinerama” was replaced with “70mm” at Southcenter./

Saw a lot of 007 movies there. Inside, the oval-ish ceiling made it look like a giant shoe was about to step on you.

As a Union projectionist, young and new to Seattle, I got very lucky and wound up running Raiders matinees in 70mm all Summer long in 1981. The booth had been automated by the time I came to the Southcenter. It had a single Century JJ II projector (it’s mate went to the John Danz Theatre in Bellevue), a Christie Autowind 3 platter, Xetron 4,000 watt Xenon lamphouse. Audio was a Dolby CP100 with BGW amps. Original “Voice of the Theater” speakers were still in place. Automation was an SRO Theaters custom made “Commander”. They installed this automation unit into all of their theaters.