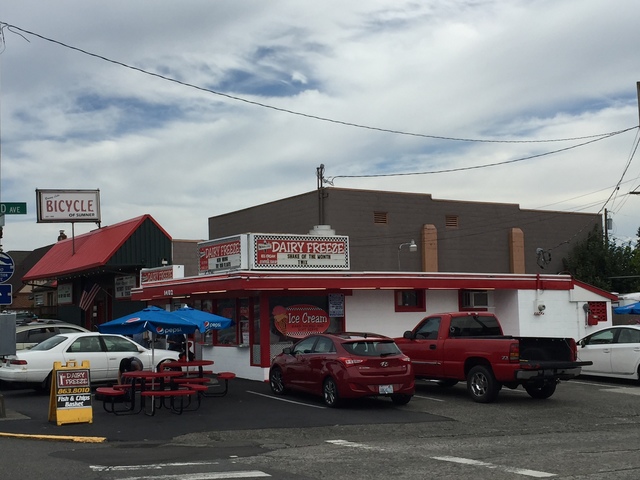 William Nasmyth began showing movies at his picture house, the Riviera Theater, in 1911. Sumner residents saw their first talking movie in 1929. The building was demolished in 1973 to make way for a drive-up bank.

SUMNER, WASH-Mike Barovic has closed the local Riviera Theater because of lack of attendance. According to his son Don, the house may be reopened in the summer.

The Riviera Theatre last operated in the building that was built in 1924 as the Liberty Theatre. This photo from the 1920s shows part of the theater at far right, and the L in the name Liberty can just be made out on the sign above the marquee.

This photo from the 1940s shows the Riviera just down the block, and it’s clearly the same building the Liberty was in in the 1920s photo.

If there was a Riviera Theatre in Sumner in 1911, the only explanation I can think of is that the original Riviera was closed sometime before the 1940s photo was made and the name was moved to the Liberty building. However, the only theater I’ve found mentioned at Sumner in early trade journals is a house called the Sumner Theatre, in operation by 1916 and still operating in 1922. I haven’t found William Nasmyth mentioned in any of the early trade journals, either.

There is a building at 1406 which exterior suggest that it might have been a theater at one time. Is it possible that the address listed above is off and that a least a portion of the theatre still exist?