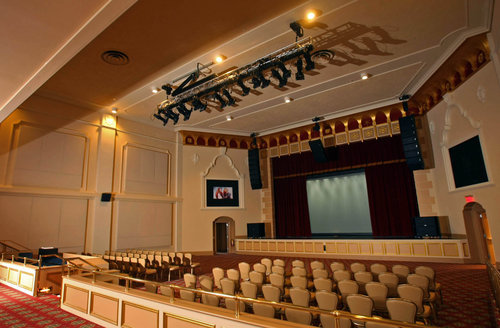 Originally opened as the Buckhead Theatre on June 2, 1930 with Nancy Welford in “Gold Diggers of Broadway”. Seating was provided for 800 in the orchestra and 256 in the balcony. It was later operated by Affiliated Theaters, a subsidiary of McLendon Theatres. On June 29, 1962 it was renamed Capri Theatre after being taken over by Weis Theatres. The first time I visited this theatre was in the mid-1970’s. In 1977 the Capri Theatre closed and it reverted back to its original name and became Atlanta’s first Cinema ‘N’ Drafthouse on July 18, 1980. The theatre is strictly live performance now and host quite a few top name acts. There might be a dark cloud on the horizon for the Roxy Theatre in that it might be demolished once the lease expires with the current tenant.

The Roxy Theatre was closed in 2009. By spring 2013 it had re-opened as the Buckhead Theatre presenting concerts and special events.

I worked at the Capri Theater as an usher in 1962 and 1963. It was my first job for $1.10 an hour. I was 15/16 years old and we lived right in Buckhead at the time, after moving from Florida. The Capri was a first run Theater in the ‘60’s I remember two big films that I worked were “To Kill A Mockingbird” and “Barabbas” with Anthony Quinn. I still remember the formula for the popcorn machine; 1 cup popcorn, 1 cup “Popcorn” salt, and 3 pumps of melted Coconut butter. It the BEST! And only the one size of red and white boxes, I think it sold for .25 or .35 cents. The lobby was so small that for big films like “Mockingbird” the people would buy tickets and then stand in line up Roswell Rd. waiting for last show to let out. I think I saw Mrs. Carter once, but I most fondly remember “The Manager” He was a dapper little man always dressed to the 9’s Tux and black opera shoes. Arriving at work 15 minutes before opening by taxi or more often then not in a chauffeured Cadillac or Lincoln, he would alight from the back door and I saw him kiss more the one extended gloved hand. He was a Gentleman and quite a character. I can’t ,for the life of me remember his name, But I remember his cigars and to misquote a new favorite film of mine; “He was a most liberally perfumed man”, I can still see him in my minds eye. I believe that the resemblance that the character of Monsieur Gustave H., The Concierge of The Grand Budapest Hotel bares to “Our Manager of Capri Cinema” is why I like the film so much. I have fond memories of the “Capri” 22 May 2015 Francis C. Howland Jr. Msg.USA ret Oxford-on-the-Choccolocco, Al

Would love to re connect with former Capri Cinema employees..I was one of the managers for the Weiss Theatre chain..I managed Peachtree Battle, Fine Arts,Broadview and the Capri in the middle 70s..Steve Crisp was one of my best friends…Lost contact after he moved to North Carolina.Saddened to hear of his death.. There were many box office robberies during that era..I was managing one evening when “Granny” the cashier was robbed. Never heard an 85 year old lady scream so loud everyone heard her. I JUST GOT ROBBED. AGAIN!!! Fond memories….I’m sure Sidney Katz has also passed…Please contact Donald Edwards 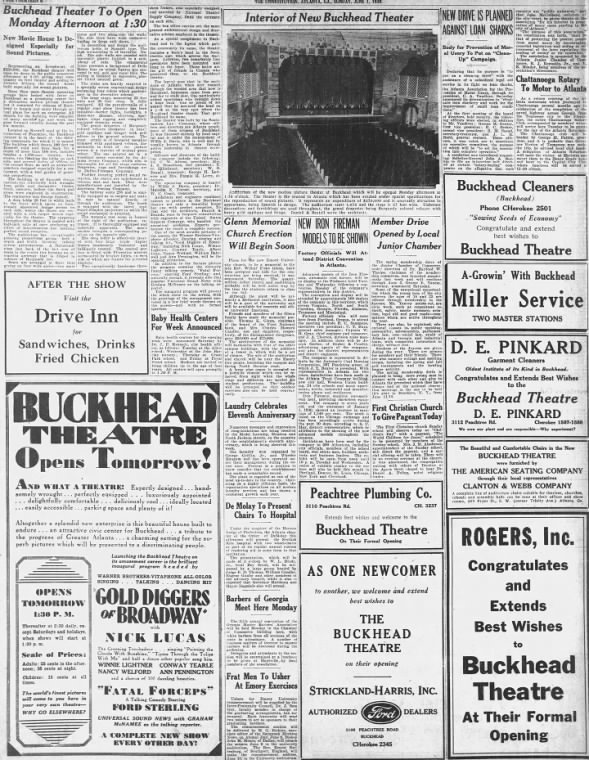 This reopened as the Capri theatre on June 29th, 1962. Grand opening ad in the photo section.

Stan Malone, you’re right about the extended runs at the Capri. I think they often used the term “road show” for those extended runs. The Capri had numbered seats … and I think some of these “road shows” were possibly reserved seats.

“The Taming of The Shrew” with Richard Burton and Elizabeth Taylor was a 1967 run. I reached a point where I was repeating dialogue from “Shrew” and “To Sir, With Love” after seeing them so often. I also worked some shifts at The Fine Art in ‘67 while “A Man For All Seasons” (6 Oscars including Best Picture, Director and Actor) was playing.

I remember riding the bus from Hapeville to Buckhead to see movies when this was the Capri. The first movie I saw here was “Funny Girl.” I remember seeing “Earthquake” and “Roller Coaster,” both in Senserround. “Roller Coaster” was the last movie to play at the Capri.

LOST HORIZON played for quite a while at the Capri. I remember the big lit up marquee for it. I wonder if anyone took pictures of the Capri’s marquees back then. I would love to see it.