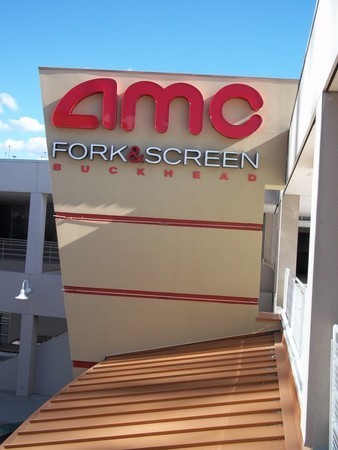 Opened as the Tower Place 6 on July 23, 1976, this was the second AMC theater to take root in the Atlanta area.

Although the Tower Place 6 is a bit more spacious than its slightly older sibling, the Omni 6, it pales when compared to the multiplexes AMC has built in the Atlanta area since the 1980’s. Both the Omni and the Tower would probably easily fit into one of the larger auditoriums of the AMC Barrett Commons with room to spare.

On June 6, 1997 AMC converted the complex into a cinema and draft house venue and changed its name to the Buckhead Backlot. It became known as AMC Buckhead Backlot Cinema & Café, and by 2013 became the AMC Fork & Screen. It was closed on July 14, 2021.

I patronized the Tower Place 6 from the time it opened until some time in the 80s.
It was on the lower level of the Tower Place mall -to the left was a French restaurant called
Anne Marie’s – to the right, for a while was a disco called Kraz. Across the Piedmont Road side of
the mall was Kroger and The Limelight. I remember Tower Place 6 as perhaps the first movie theater I went to where the concession people wore some type of uniform.
I wasn’t sure what was happening with the place when it went to “dollar show” status. Then
I really couldn’t figure things out when all shows were one cent. That’s right, a penny.
I saw Schindler’s List and many other movies there some time in the 80s for a penny. I heard they were going out of business, and I thought perhaps the one cent admission was some kind of tax write off.
As I remember, the TP6’s marquee was on Peachtree Road at the entrance to the mall – correct?
Funny, I don’t get as nostalgic for those multiplexes as I do for the real theaters.

Now AMC Dine-In Buckhead 6, in line with AMC’s realignment of brands due to their takeover of Carmike Cinemas.

This opened on July 23rd, 1976. Grand opening ad in the photo section.

This reopened as the Buckhead Backlot cinema on June 6th, 1997. This is the first dine-in for AMC.

This theater has closed: