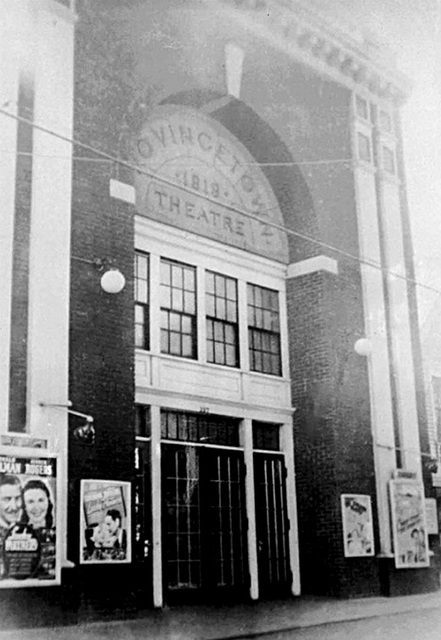 Before the New Art Cinemas, Provincetown had a single screen movie house on the opposite side of the street. This theatre closed and was converted into a jewelry marketplace in what was the auditorium. The back wall was demolished providing a view of the ocean. The former lobby, still with its pitched floor, had small shops on either side. The words “Provincetown Theatre” could still be seen high above the exterior proscenium.

I recall vacationing with my parents in the mid-1950’s and wanting to see a Marilyn Monroe movie playing there at the time. I was out voted. Guess they didn’t want to cater to my dream girl obsession. The building eventually was the victim of a massive fire during the 1990’s.

I remember visiting this place when it was retail space and it still is after they rebuilt the place. It still looks the same too, I think I remember the lady telling me that they used old photographs to get it just right. It’s very beautiful now and I think it has an open ceiling. The coffee shop may still be there and so may the place where they sold shells and rocks. Also, there’s a theater in there that shows art films, it’s a pretty good sized one too. I saw a documentary on the theatre fire, the fire not only destroyed the theater, but did some damage to a few other buildings, like The Crown and Anchor. One last thing if you go out the rear of the building, you’ll see that old stone sign.

I forgot to put down that the building is called Whaler’s Wharf and the theater inside is run by New Art Cinemas. It’s state of the art and like I said a pretty nice place. It’s on the second floor and it will reopen on February 10, 2006, the anniversary of the fire.

In reply to Spike Speigel,,,I used to work in Whaler’s Wharf for many years before it burned down. It was one of the last places in Provincetown where people actually made the crafts they sold. Provincetown used to be full of unique handmade crafts. The new building is nothing at all like the old building. It has a couple of the original craftspeople left but is mostly mass produced gifts etc ordered from a catalog, not unique handmade one of a kind crafts. The funky fun atmosphere disappeared when the old Whaler’s Wharf burned down in 1998. Provincetown will always be beautiful, but it will never be the same…now you have to be very wealthy to live there, and all the taleneted craftspeople are slowly being pushed out by the high rents.

The 1927 Film Daily Yearbook lists one movie venue for Provincetown, the Provincetown Theater with 700 seats, open 7 days per week.

The Theatre Historical Society archive has the MGM Theatre Report for the Provincetown Theatre. It’s Card # 553. Despite clearly marked “Mass.”, it was filed with cards from Rhode Island. It has an exterior photo of a row of French doors in the entrance. The photo was shot in May 1941. The Report states that there were 441 seats on the main floor and 173 in the balcony, total 614. Fair condition. It’s at least 15 years old (as of 1941) and has been showing MGM films for over 10 years. Address: 239 Commercial St. The 1941 population of P-Town was 3,600.

With more than 600 seats, the Provincetown Theater was a coming-of-age statement for the town when it opened in 1919. It looked like a big-city cinema, a solid work of masonry in a town of lumber, unabashed in identifying itself in big chiseled letters under the exterior proscenium arch.

In its early years, the theater was a franchisee of First National Pictures, one of the most powerful studios of its day. The house was used for other programs as well, including at least one appearance by Donald B. MacMillan, who showed his movies of the Arctic in 1925.

During its heyday, the Provincetown Theater was owned and run by Victor M. Lewis, a powerful businessman. He was also the proprietor of Lewis’s New York Store on what is now Lopes Square. In 1931, on the petition of more than 500 residents, the Selectmen allowed Lewis to show movies on — gasp! — Sunday nights. The projectionist for many of these years was Antone Joseph Viera, who had also worked at the Star Theater.

Just how important the theater was to the off-season life of the town became apparent in October 1943 with the closure of the nearby Colonial Cold Storage plant, which had provided heat for the theater in the fall, winter and early spring. The Advocate mournfully announced that “the Cape End will be deprived of its only public form of entertainment.” Lewis managed to find an alternate heating source in time for a March 1944 reopening.

In 1973 Dale Elmer bought the old theater and combined it with the Handcrafter next door, at No. 241, which he had purchased in 1963, to create Whaler’s Wharf, a kind of artisans’ collective and craft market that was set up in what had been the orchestra level of the auditorium. Meanwhile, the old balcony was partitioned off and retained as a cinema, now called The Movies. The proprietor, Monte Rome, also ran the Metro Cinema in the former Congregational Church of the Pilgrims. Movies may have been the least of the experience at The Movies. Dennis Dermody, who once managed the theater, wrote of it in 1997 for Provincetown Arts: “I not only hired the handicapped, I made a point of only hiring alcoholics, drug addicts, the mentally unstable and children who smoked. … I then proceeded to create a manifesto of how we would all work there. Our creed: ‘One. The customer is never right.’ And two: ‘If anything goes wrong, just leave the theater.’ … “Our projectionist had a bit of a drug problem, so you never knew what was going to happen. One night I stepped from my manager’s office/cocktail lounge to find, for some reason, Children of Paradise being projected on the ceiling. (What astonished me was that the audience was patiently leaning way back in their seats, just taking it for granted they should be reading subtitles over the exit sign.) … “But these were wonderful times. There was the sweet thrill of coming to work on nights that we showed Bertolucci’s The Conformist, Altman’s Thieves Like Us, Malick’s Badlands or Cocteau’s Orpheus. Just sitting at the top of those stairs, basking in those images — while the audience used their movie schedules as makeshift fans — was so wonderful on those humid, airless nights. So what if the ticket taker had passed out and was slumped over the counter, or the concession stand boy was sneaking his friends up the back exit or the projectionist was speaking in tongues and had his clothes on backwards. There was magic in the air.” That magic came to an end in the 1980s, when the theater closed and the balcony was converted into use as a storage space for the Whaler’s Wharf shops. But the 20 or shops kept the old theater lively. And cheap space at Whaler’s Wharf helped the artists and artisans. Elmer would rent by the square foot. “If you only needed 10 square feet, you could get it,” the architect Regina Binder recalled.