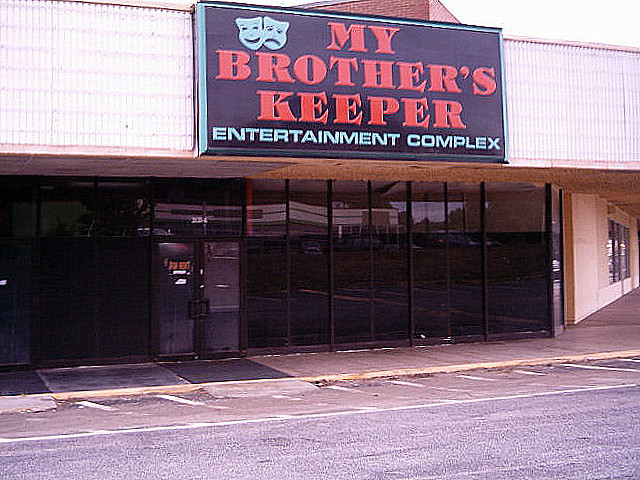 Martin’s Westgate Cinemas was opened on January 28, 1965 with the Atlanta premiere of Walt Disney’s “Those Calloways” starring Brian Keith. It had two quite large auditoriums. It inadvertently became a triple in 1977 when a ‘head shop’ adjacent to the front auditorium went up in smoke. Rather than splitting this auditorium down the centre, it was partition off about at about the ¾ mark. I was told this arrangement allowed for additional time to repair damage done by the fire while keeping at least one of the auditoriums functional. This third auditorium had a screen only a few meters wider than a View Master. It was closed in 1988.

Am interested in knowing what is the current status of this theatre.

I remember seeing “Gone With The Wind” with my family during the late 1960’s. I don’t know why but my father wanted to sit in the smoking section.

This was not palace but in the 60’s and 70’s was not a bad place either. In the 1970’s this was a vibrant shopping center with a huge disco, Mr B’s Figure 8. Also in the 1960’s Lester Maddox’s Pickwick Restaurant was located here.

The last time I went, I saw a treasure called “Deadtime Stories.”

Like I said, it was not a palace but before they split one auditorium, it was a good place to catch a movie.

I was never aware of this place when it was a twin. I do know that it was opened by the Martin chain in 1965 (January I think) on the same day that they also opened the Village and Eastgate. The Eastgate was later renamed Suburban Plaza. All three were later purchased by Georgia Theatre Company.

On occasion it would do good business over the years, but for the most part GTC would put most of their booking efforts into the 1100 seat Greenbriar Mall theatre across the Lakewood Freeway, especially after the Greenbriar was twinned. It was fairly common for the bigger attractions to open at Greenbriar and later move across to Westgate.

The biggest year I can remember for the Westgate was 1974. During the spring and summer Westgate opened The Sting the day after it left its exclusive run at the Georgia Cinerama and The Exorcist the day it went wide from its run at the Phipps Penthouse. Both of these locations were so far away from SW Atlanta that it was like getting these pictures first run. That, combined with an unusually strong slate of movies opening wide rather than exclusive run, made for big business here. Some of those other features were Mr. Majestic, Paralax View, My Name Is Nobody, and the prequel to Billy Jack reissue of Born Losers.

With its three screens, a megaplex in those days, a poor year at the Lenox, which was tied to the fortunes of the United Artists Pictures release schedule, and the fact that the Greenbriar spent some time closed for twinning, Westgate was one of the top grossing theatres for GTC in 1974-5. The EFC Ben Hill Twin just down the road was never much of a factor.

Since its closing the theatre has been a church, and amusement hall and even had a go as a nightclub following the demise of the famous Mr. V’s Figure 8 Disco with its trademark “Earthquake Sound.”

I was an usher/popcorn boy at Westgate— popcorn was made in a small room for that purpose upstairs next to the projection booth, and carted down, boxed, to the concession stand.

Based on this extensive experience, I was hired as the first employee at Greenbriar to be the head usher.

BTW— Lester Maddox’s store at Westgate was a furniture store… he was out of the restaurant business by then…. i used to get my hair cut at the barbershop at Westgate, and Lester would hang out there, telling stories of his ‘glory days’…. although he was yet to be governor at that time…

Here is the Westgate now. I tried to look inside but the windows have been blacked-out.
www.flickr.com/photos/jfb57/4797764340/

Some more pictures of the old Westgate Cinema 2011.
View link

Stefan, your pictures bring back quite a few memories of how things were.

The Martin Eastgate and Westgate Twin both opened on January 28th, 1965. Grand opening ad in the photo section.

At some point this was purchased by Georgia Theater Company along with Suburban Plaza, Village, Belmont Hills, and Strand. A previous comment on this page indicated that a fire next door to the smaller house caused it to be closed for cleanup and it was at this time that the twinning took place making the theater a triple. That explains why the small side was twinned instead of the larger house. I do not know when this took place but it was well before 1977. I think I recall ads for it as a triple as early as 1971.

Despite being a big money maker for GTC in the mid 70’s, by the early 80’s business had declined to the point that it was actually closed for the winter once. (1980-81 I think.) When business did not improve with the weather it was decided to close it. The City Manager was convinced that Westgate was still worthwhile so he sent out a checker to take a look at the place. Turned out that there were many more people in the theater than there were tickets sold that night and after further checks showed the same thing the manager was encouraged to leave.

A new manager was installed and boxoffice receipts increased 10 times the amount reported on the previous Saturday night even though that first night for the new manager was on a Tuesday. Westgate never returned to its busy days of the 70’s and when I was working at Greenbriar I would often load an outgoing print onto Westgate reels and they would continue the run across Lakewood Freeway. However, it was a going concern and was only closed after the sell out to United Artists Theaters who did not care to be bothered with such a marginal location.