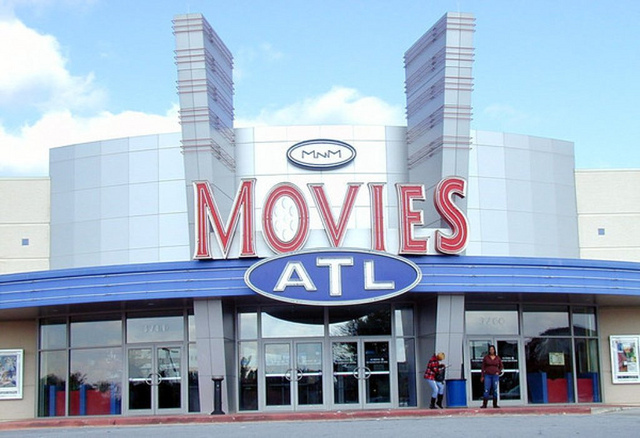 Movies ATL was opened November 2, 2007. This is a very nice addition to the Southwest metro Atlanta area. The auditoriums range in size from 80 seats up to 300. All auditoriums have large screens and stadium seating. Another nice thing about this theater is it has shown some independent movies that have not played Midtown or Tara. It is about time the south side of Atlanta has had a theater willing to show independent films. Hope this trend keeps up.

Thanks Jessie and Alonzo.

Carmike acquired this theater and two others in the greater Atlanta area in August of 2011.

This opened on November 2nd, 2007 as Movies ATL. Grand opening ad in the photo section.

Local news outlets are reporting that three young teenagers were shot last night as they were among about 200 young people leaving the AMC theater. The police spokesman said that for the last six months there have been problems with hundreds of young people congregating in the shopping complex with nothing to do after they leave the theater. As he put it, “…first the fights break out, then the guns come out, then the shooting starts.”

Recently there was another shooting behind the Longhorn Steakhouse and then there was the incident I described in the previous comment. The spokesman also said that they were going to talk to AMC management about not admitting teenagers at night unless they were with a parent. Good luck with that.

Is this in East Point, Atlanta or unincorporated Fulton? Hard to believe the local cops can’t help, but then again isn’t this the same as the end of Magic at Greenbriar and Old National?

News was quoting East Point PD. I didn’t realize that East Point extended this far west and outside of 285 until now. Maybe they annexed it to get the tax money. (Also, all of Fulton County is now incorporated with the city of South Fulton covering the old unincorporated areas that were left over.) I was not aware of this type of problem at MJ but it certainly sounds like a repeat of Old National. However by that time the shopping center and general area around Old National Highway was getting pretty run down. This Camp Creek development is still a popular destination with big box stores and retailers like Target and Home Depot. I’m sure those stores wish the theater had stayed closed.

After AMC closed the MJ another company opened it briefly and had some troubles like this, I don’t recall shooting but fights, before it closed. The last time I was in ATL with some time to kill I visited the Delta museum and went out to Camp Creek to get dinner before my flight. I was at the Ruby Tuesday and there was a shooting at another restaurant in that area. I finished my meal and went to the airport without delay. When Camp Creek first opened I would fly in for the holidays and shop there for my kids, not anymore, just too much foolishness in the area. I never felt like Atlanta paid much attention to the SW side of town.