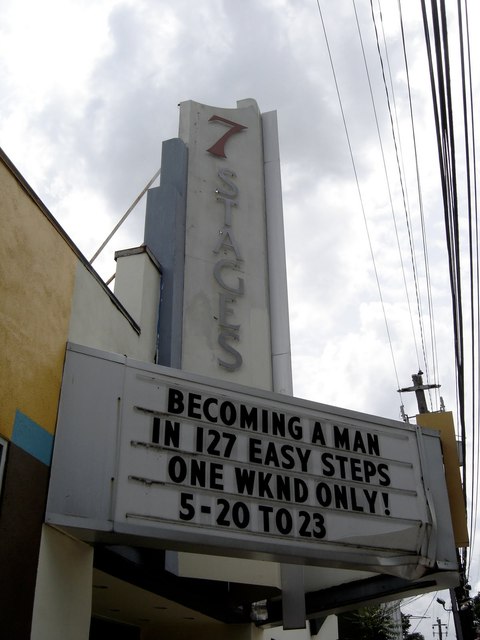 Opened in October 1940 as the Little 5 Points Theatre. This theatre as well as its larger sibling, the Euclid (aka Variety), have miraculously managed to structurally survive in an urban area where change is constant. Although both theatres lost most of their original interior decor due to neglect during the 1960’s and 1970’s, a lot of fine effort has gone into making each theatre a spectacular venue for live performance.

The Little Five Points was one of several theaters that I was aware of, but never had the chance to attend, included: the DeKalb, 130 E. Ponce de Leon Avenue, NE (on the square in Decatur) which later became the site of a J.C. Penny store; and the West End, 595 Lee Street, SW (in West End), which I remember as a book store. They had already ceased operations as movie houses at the time I became aware of them. To the best of my knowledge, some of the few of these left standing are the Little Five Points (now known as the Seven Stages); the Euclid (as the Variety); and the Fulton (or so I gather from the listing on this site).

Yes, it’s really remarkable that the Little Five Points and the Euclid have survived in an area known for such sweeping changes. However it is notable that the Plaza Theater and the Garden Hills Theaters are still operating under the management of Lefont Theaters. Structures that are still standing include: the Gordon Theater, 960 Gordon Street, SW, in West End (as the Church of the Black Madonna); the Hilan Theater,800 N. Highland Avenue, NE (renovated for commercial use); the Glen Theater, near the juncture of Candler Road and Glenwood Road in South East Atlanta (now a pawn shop); the Madison Theater at 496 Flat Shoals Road, SE (apparently undergoing restoration according to this site); the Rhodes Theater, 11 – A.S. Rhodes Center, off Peachtree Road (closed when last I saw it); and the facade of the Temple Theater, 456 Cherokee Avenue, SE (between Memorial Drive and Grant Park) still stands, complete with the its Masonic symbol.

Theaters that I never knew included the American, 771 Marietta Street, NW; the Brookhaven, 4012 Peachtree Road, NE; the Cameo, 61 Peachtree Street (downtown); the Cascade, 1340 Gordon Street, SW (near the juncture of Cascade Road); the Empire, 42 Georgia Avenue, SW (near present day Turner Field); the Fulton 761 S. Central Avenue, SW; and the Memorial, 657 Memorial Drive, SE (in the vicinity of Oakland Cemetary). Hope someone whose memory of Atlanta stretches back farther than mine can shed some light on them.

Here’s a recent shot of the 7 Stages with the Variety Theatre in the background: View link

To whom it may concern,

My name is Robert Napier. I am doing a documentary about Atlanta theaters. I am in search of locating an abandoned theatre and using the documentary as a catalyst to support renovations to the existing theatre. We are also looking for Atlanta locals who are between the ages of 40 & 70 who have exciting stories about their cinema experience at the time. For more information, please visit

I often went to the Euclid Theater kiddie matinees, starting about ‘57. The Little FIve Points
was closed then, if memory serves me correctly. I remember that there was an A&P supermarket
close to that theater and a Woolworth’s a little further up the street. By the time I graduated from
Bass in '65, the A&P was gone, and I believe Woolworth’s had closed as well. Indeed, at one time,
I think there were two supermarkets in Little 5 Points. In the mid60s, the area had started to
decline – noteworthy that a structure as big as the Little Five Points Theater, right on Euclid Avenue,
could remain empty and largely untouched for more than 20 years.
Glad there’s life in the building now.

Had the pleasure of attending a play there with my students in 2011 and it was wonderful to see this structure maintained. I told my kids that they were sitting in a piece of history!

Just added a screen shot from “Driving Miss Daisy” with the 7 Stages mocked up as the Rialto. The Variety Playhouse is just beyond it.

Listings for the Litte 5 Points started to appear in October 1940. No grand opening ad found.