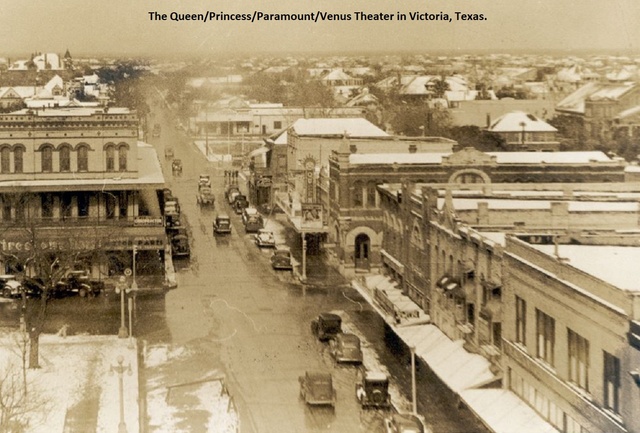 The Princess Theatre was opened April 1, 1909. In January 1915 it was renamed Paramount Theatre. It was purchased in 1927-28 from F. S. Ferguson. Lease was undermined in 1931 by Jefferson amusement. The theatre was re-acquired by Frels Theatres in 1952, from Pete Stoilis. Operated as Mexican theatre in competition with the Victoria Theatre, which then changed to a third run house. Theatre was renamed Venus Theatre at this time.

The Venus Theatre burned to the ground on November 11, 1960. Tomasita (cat), a famous resident of downtown Victoria, survived this fire. Still an empty lot near the downtown square in Victoria.

The Princess was open as early as 1910. An ad in the December 6, 1910 Victoria Advocate listed three features at the Princess – “The Hustler Gets the Coin” (comedy) and “The Path of Duty” and “The Hand of Fate” (both dramas).

The Princess was also once named the Paramount. An ad in the January 20, 1915 Victoria Advocate announced that the Paramount was opening at 7:00 p.m. that evening in the “Old Princess Theater Building”. The opening feature was “The Dancer and the King” with Cecil Spooner and Marquita Dwight.

Childrens Discovery Museum is listed at this address now.

The June 26, 1913, issue of The Tradesman said that architects Hull & Praeger had prepared plans for a brick extension to the Princess Theatre, Victoria, Texas (James Hull and Charles Emil Praeger.)

Although the University of Houston-Victoria Center for the Ats uses the address 204 N. Main Street, it does not occupy the building the Venus Theatre was in. As can be seen in the vintage photo on the photo page, the theater was on the now-vacant lot in between what is now the UHV Center and the Romanesque Revival O'Connor-Proctor Building on the corner of Forrest Street.

The Princess Theatre was opened April 1, 1909. Taylor & Taylor took on the theatre relaunching it as the Paramount Theatre on January 19, 1915 with “The Dancer and the King.”

In September of 1915, the operators of the Park Theatre took over the Paramount and rebranded the venue under its former name, the Princess Theatre. on October 19, 1915. In July of 1928, the Frels Circuit took on the Princess and transitioned it to sound Vitaphone films. Feels closed in January 30, 1931.

The Jefferson Amusement Company took on the Princess and renamed it the Queen Theatre – the town’s second Queen Theatre – with a new Western Electric system for sound films. The Spanish architecturally-themed Queen relaunched April 5, 1931 with “Their Own Desire.” Long Theaters Circuit took over the location and closed it in 1940 after launching two new downtown theatres in the Rita and El Rancho. On a ten year lease, the building was used for other purposes.

E.H. Brooks took on the former theatre and renamed it the Venus Theatre relaunching as an Hispanic theatre on June 12, 1951 with “En Cada Puerto un Amor.” The film transitioned back to discount, sub-run double features. Its final films were “The Big Country” and “The Tingler” on November 11, 1960 when the Venus Theatre burned down.