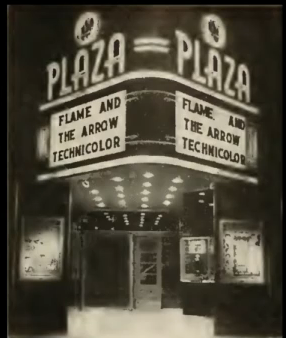 The Plaza Theater was built in 1917 replacing an older Plaza Theater that had burned down. This theater had orchestra seating on the main floor, which was surprisingly small. There was also little or no slope to the floor. The balcony was considerably larger though. Not only did it overhang part of the main floor, but extended back over the lobby area as well.

By the 1950’s, this theater was well worn and musty, never having been refurbished over the decades. It closed around 1959 never to reopen, and was finally demolished.

The Empire Theatre was where the Salem Theatre’s parking lot was, corner of Crombie and Essex. It had an overhand but no marquee showing titles. The legend was that E.M. Loew tried vainly to buy the Empire, finally building his new Salem Theatre virtually beside it in spite. The Empire sat idle for a few years after the Salem opened before falling to the lot, which was city-owned. Back to the Plaza, I recall almost all the films I saw there, including a double bill of “King Kong” and “Mighty Joe Young”. The best was a matinee of “Abbott & Costello Meet Frankenstein”. Filled with kid, it was absolute bedlam. Oh, to see 35mm prints of these today.

Thanks for contributing that information! We had been wondering what had previously stood in that parking lot next to E. M. Loew’s Salem Theater. It was the Empire Theater! That makes sense to me, because I clearly recall all three theaters (including the Paramount) coexisting for quite awhile, although the Empire had long been closed. And I did watch the demolition of the Empire for awhile. So the demolition didn’t create a lot for E. M. Loew’s Salem, simply the parking lot next to it. And when I visualize it in my mind’s eye now, yes, I can see those two marquees adjoining one another there. I should have remembered that, because my dentist was directly across the street on a second floor with the waiting room windows looking out at the two theaters. Back in the 50s what I most remember seeing at the Plaza were old WWII movies. And yes, it could get raucous in there!

Yeah, the horror and outer space movies at the Plaza… Sometimes we’d start hooting at the primitive special effects of the day. In the 1950’s the kids' matinee ticket prices were 25 cents at both the Paramount and Plaza as I recall. Salem was a great place to grow up in during that era.

It’s great to see a photo of the Plaza frontage. If that was 1950, it must have run for about six years or so and then closed again. I think it reopened around ‘57. I saw “Forbidden Planet” there but it was second run. Then, the marquee said “Always Two Big Hits”. Since very little money was spent to update it, it was like walking into the past. I’m now not sure if it ever was run by E.M.Loew. I might have confused that round Loew insignia with the centerpoint of the Salem Theatre marquee, similarly shaped but larger. The Plaza was old and dusty with its own distinct odor but I loved it. We got our quarters’ worth on many a Saturday afternoon.

Yes, the Plaza was old and dusty and musty, and it seemed that it was never maintained well from the day it was built. Thus that “distinct odor”. I found that even the last row in the orchestra section was too close to the screen, so always went up in the balcony to get further back, as it extended back over the lobby and entrance. The Plaza was always in need of refurbishment, but never saw it. E.M. Loew’s Salem was one of the early nondescript shoebox theaters, although with a capacity of 1,000 was larger than today’s standard the reclining seats were nice, I must admit. But the crown jewel in Salem was the Paramount designed by Rapp & Rapp. Now that was class!

The original Plaza Theatre was built in 1913. The site had previously been occupied by a house called the Witch Theatre which had burned down earlier that year. The Plaza was to have been fireproof, but apparently wasn’t if it burned again in 1917. This is an item from the November 29, 1913, issue of The Moving Picture World:

“The Plaza Amusement Company, of Boston, is a new concern, with authorized paid in capital of $15,000. The promoters are: Harry F. Campbell, Samuel Grant and Ephraim N. Cook. This concern has taken a ten-year lease on the property in Salem, Mass., formerly occupied by William Game’s Witch Theater, which was burned some months ago. The house is being entirely rebuilt, and will be a modern, fireproof theater, with a seating capacity of 1,000. The house will now be known as the Plaza Theater, and Warner’s Features will be the special attraction here. The new owners show their faith in the pictures by so building the stage that no vaudeville acts could possibly be used.”

Destruction of the Witch Theatre had been reported in the April 16, 1913, issue of Fire and Water Engineering:

“Game’s Witch Theater, on Theater row, Essex street, Salem, Mass. was burned during a recent night fire, as was also the furniture store of the J. L. Lougee Company. The blaze started in the office of the theater, and for a time the entire district was threatened. Help was called for from Peabody, Marblehead, Beverly and Lynn. The theater was empty when the fire started.”

A later issue of MPW said that the Plaza Theatre opened on December 31, 1913. I’ve been unable to find anything in the trade publications about the later fire and rebuilding in 1917.

That’s great historical information on the predecessor theater to the Plaza. Given the date of the destructive fire at the Witch Theater and its later demise in 1913, and the opening of the Plaza Theatre in December of that same year, I wouldn’t rule out that the earlier information given above might have been in error. Possibly the theater that followed the Witch Theatre included safety improvements such as a fireproof stage curtain and water standpipes. But despite the innovations, the building still burned down! On the other hand, I do recall a little detail in smaller letters on the original marquee reading “New” Plaza Theater. It was the word “new” that implied that there had been an earlier Plaza Theater on that site. It seemed that the word “new” was to distinguish between two Plaza Theaters. My paternal grandfather was a lieutenant on the Salem Fire Department roster until his death in 1964. I’m sure that as a kid had I asked him about the fire(s)he would have known all about it. But… I never asked.

David/ DApril1 – Yes, sometimes when a theater had “New” in its name it meant that it was not to be compared with an earlier theater of the same name on the same site or different site in town. But it also could be used to indicate that the theater had been totally renovated – same theater, new renovations. I’ve come across this situation a few times!

David and DApril are both me.

You make a lot of very good points there. So many decades have passed that we may never know the answer for sure.

This explained a memory I had of seeing a double feature at The Salem of The Old Dark House and Maniac (1963 versions of both titles)and seeing another theater marquee almost next door as I came out. So The Empire was still standing then.